Tampa, FL – The Breakdown Showcase Freshmen/Sophmore standouts are a special group, this pack of talent stands out as the area’s top young prospects.  As it should be, the focus of the National and State media is always on the next class going into their Junior year.  Consequently it can be sometimes difficult to find information on the performance of underclassmen at events however, BKD has been able to showcase the rising sophomores and juniors who has performed well over the previous year in the Tampa area. 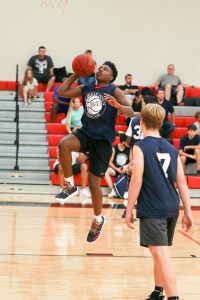 2021 6’2” G CJ Crews, Strawberry Crest HS (FL) One of the best shooters in the field, Crew’s displayed a soft shooting lefty stroke both off the catch and dribble and didn’t need much space to get it off.  The young scorer was the best Freshman prospect in the Tampa area when he arrived as a freshman to BKD.  He was certainly one of the guys to catch the attention of the coaches in attendance, especially if your looking to recruit a shooter.  When Crews’ is outside game is on he can score in bunches.  Crews will exceed in his development as he pushes himself on defense. However, he is one of the better shooters in his class.

2021 6’7” Jahsean Corbett, Poinciana HS (FL) was one of the breakout performers out of the 2021 BKD class.  He returns this year to BKD much stronger and  more active, he was one of the few who showed rapid progression on both ends.  Corbett can change games offensively just by being effective in perimeter as well as becoming a target in the post. He’s difficult to guard because of his length.  He’s another prospect that we anticipate will get plenty interest and offers soon. 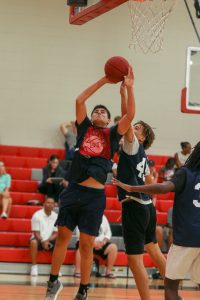 2021 6’5” Diego Platas, George Jenkins HS (FL) is coming into his own! Platas is a long forward who is screaming of long term potential.  He stood out as a rising prospect in a private viewing 2 years ago; at the Showcase we recognized he has worked on developing his footwork and shot selections.  With a little more strength and a solid 3 ball Platas will be even attractive to colleges Coaches. 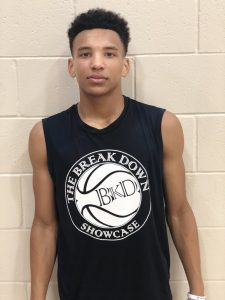 2021 6’1” Justin Hicks, Bishop Snyder (FL) should increase his offer list real soon! The Jacksonville, FL native is proving why he would be one of the region’s best new prospects; active, tough and tenacious.  He’s a big time floor general and overall smart player.  He can impact the game with his court vision and passing abilities.  Hicks is a clear dominant weapon when attacking close-out defenders and he has an unexpected bounce at the rim.  We’re confident  he’ll  fit well in a Division 1 program soon.  He’s one of the biggest stock-risers coming from his area, coaches don’t sleep on him! He has interest from many colleges and universities and an offer from Ole Miss. 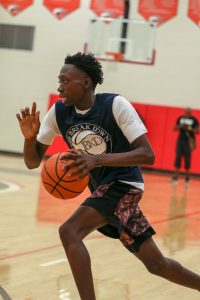 2022 6’2” G Faheim Meran, Miramar (HS) as I said before, is one of the better 2 way players around the state.  He’s one of the best on-ball defenders in the 2022 class, Meran made it a point to standout on in drills and game play. Offensively, he made plays; however many offensive opportunities came from his defense.  He showed a nice pull-up game and quick hands defensively.  He’ll be a gift for any team!

2022 6’6” F Christopher “CJ” Hawkins, Berkeley Prep (FL) is showing he can be effective as a stretch 4.  Hawkins was one of the better looking Forward prospects in the 2022 class.  His abilities to create off the dribble, shoot the 3 ball, and be active in the post makes him very promising.  The lefty is an active scorer and plays with an aggressive nature. 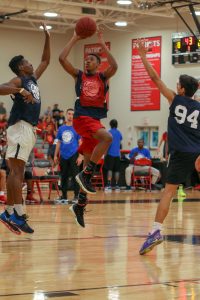 2022 6’3” Derrick Mitchell, Tampa Catholic (FL) will make a difference this year at Tampa Catholic.  Mitchell was at his best going to the rim when using his height and athleticism around the rim, he also showed  a soft touch when finishing over opposing defenders. During the showcase drills he showed he could be a scoring threat with his back to the basket as well.  He has athleticism and capabilities to make impacts in isolation situations. Mitchell is still growing in all aspects of his game and will continue to gain recognition in the Tampa area. 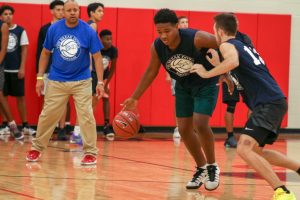 2022 6’5” G Tony Livingston, Carrollwood Day School (FL) PLEASE pay attention to him! Livingston is already seasoned and mature from football where he is the quarterback, he has a powerful build and is strong with the ball.  He can do damage with his downhill running in transition and also a deceptively good defender. One of the more impactful overall players in the class of 2022 right now.  He attacks defenders, he’s built for contact and shows skill; this 2 sport athlete is up and coming! 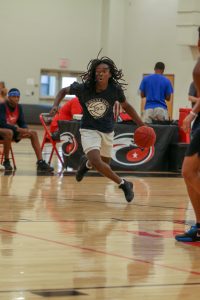 2022 6’3” SG Kaleb Walters, Miramar HS (FL) is growing in size and talent rapidly. Walters is a long, athletic guard with a balanced floor game and a good natural feel when attacking the basket.  He stays calm and under control, Walters made a quick impression with the BKD Coaching staff, they noted his “very bright future.” Nice wingspan along with a knack to score. This was his first appearance at BKD but he was an up-and-comer for SOH Elite since we saw him in 2016. This past summer performance was a sign of an emerging breakout, we expect his freshman year at Miramar HS to be a special.   Coaches, Walters should be on your RADAR! 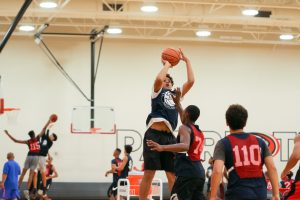 2022 6’3” G Emanuel Sharp, Blake HS (FL) continues to impress us.  His jumper would catch your eye at first but it was the little things he did offensively that really separated him.  Sharp is a ball player in the making; toughness, active and full of the intangibles.  He plays with confidence, stretches the floor from beyond the arc and does well creating his own shot. He’s has added some tools to his game as of late.  It was North Carolina at CP3 Middle School Combine where we first started to notice him.  He’s slimming down and moving quicker in the perimeter.  Sharp put people on notice with his big performance this year at BKD. 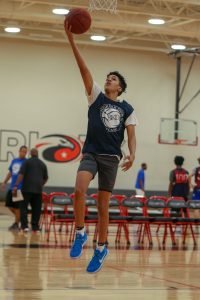 2021 G Deon Brown, Bayshore Christian (FL) is only just beginning to grow into his body but Brown already possesses touch, instincts, handle and court awareness to be special.  Brown is starting to add other ways to score when he puts they ball on the floor.  He works on the floor and in the classroom extremely hard, Brown has a very bright future.