Part 2, Day 2 of the Orlando Hoop Festival, “The Big Fellas” 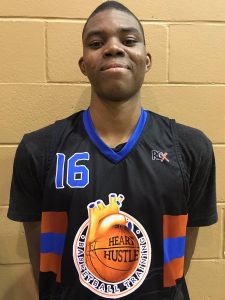 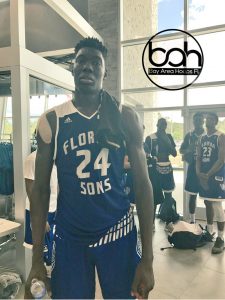 Orlando, FL – Day 2 of the Orlando Hoop Festival, we also saw some unbelievable Big Fellas.  Ibrahim Diallo stood out like a sore thumb, the 2019 7’0″ phenom center of the Florida Sons was amazing defensively.  Showing a natural ability to be a legit shot blocker and a presence in the post.  By far Diallo’s highlight reel was made on the defensive side of the ball, but not at all limited to the offensive end. He established position and took up space on numerous occasions for easy baskets.  His size and speed to move up and down the court makes him a threat in transition.  Since our viewing back in January, Diallo has become more then a basic center with height and size but a reliable force to be reckoned with.  Look for him to improve on some various shot selections but he does display a patience in the post to attract double teams.  Victory Rock Prep will lean on Diallo next season has he climbs the rankings ladder.   2018 6’9″ Quincy Tjon Affo of Hustle and Heart is improving daily.  His length is his most prize position.  With the talent to work off the dribble from the perimeter or play the 4 position effectively, Affo is very much of a versatile player.  We stand by our first assessment of Affo stating he is a loaded talent.  In the open floor he knows he fills the lanes and find comfort zones to be effective offensively.  Believe me Affo is going to be good!

Not to be forgotten, the twins for the DC Blue Devils may have been the best post duo on any team last weekend.  2019 6’9″ Makhi Mitchell and 2019 6’9″ Makhel Mitchell were assume!  Makhi footwork didn’t go unnoticed has he put defenders in spin cycles and set tones has demanded the ball in the post.  His brother Makhel big frame was unmovable at times and gave defenders fits trying to guard him.  The Mitchell brothers both can move up the floor for their size.  They also demanded attention in the post and freed up open shots for their fellow teammates.  2019 6’9″ Omar Payne of Team CP25 has showed he’s a solid two way player from our viewing in California (Pangos Camp), Virginia (NBPA Top 100) and now this past weekend at the Hoops Festival. His long arms, high IQ and work ethic to out last bigger players is a plus.  Payne can draws doubles, protect the rim and make it extremely hard for defenders to keep up when he is in transition because of his speed.  Payne has been faithfully working hard on his game, mid range and drop steps.  “The most important thing for me to improve on is post moves ,jump shot and my outside game.  The next thing for me is to concentrate on is just to get better everyday.”

Check out Omar Payne below:

Previous Part 1 of Day 2 of the Orlando Hoops Festival, 2 Standout Guards!
Next Welcoming a new era at West Seneca West in Randell