Our thoughts and predictions for tonights NCAA Womens Final Four

Dallas, TX- The NCAA Womens Final Four grand stage is set for tonight.  Theres new faces and old vets that will face off and compete to get closer to this years championship.  Mississippi State, UConn, South Carolina and Stanford are your participant’s.

UConn makes its 18th final four apprenence and Mississppi State reaches this stage for the first time.  They will square up at 9:30 pm on ESPN2.  While South Carolina, in their 2nd apperence since 2015 will face a Stanford team who has played in 13 Final Four’s.  The game is scheduled to play at 7:30 pm on ESPN.

Lets look at the teams: 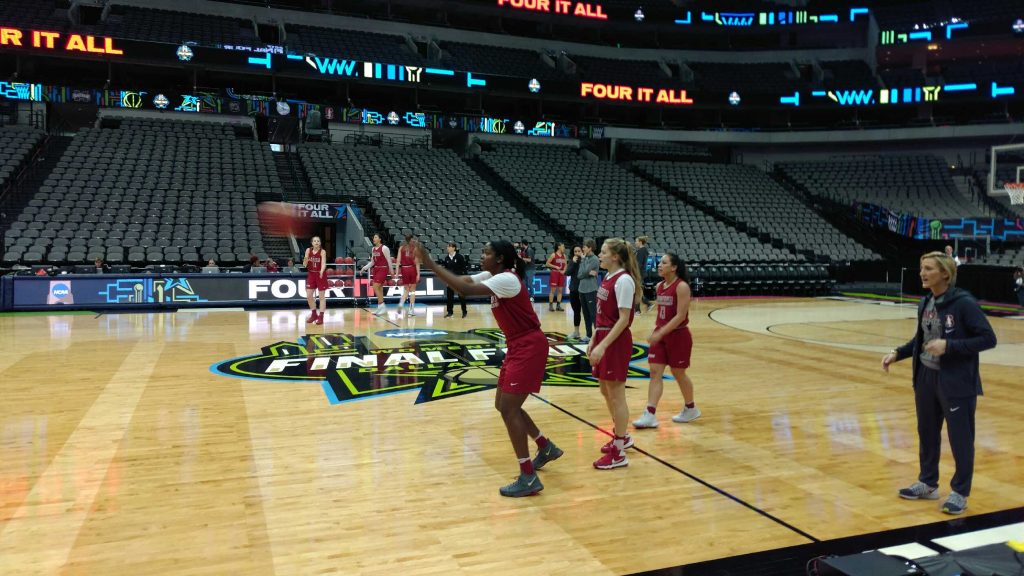 South Carolina:  Coach Dawn Staley and the Gamecocks have the tools and the make up to win it all.  Forward Kaela Davis is playing well and can be the games factor to put SC over the top. Star guard A’ja Wilson will have to been on top of her game and ready to perform.  Looking for SC to beat Stanford but will have to make Stanford play from behind early.  As long as SC keeps Stanford from knocking perimeter shots down and making them play catch up basketball, SC should win.

UConn: Comes in as the favorite to win it all, with a 111 game win streak at stake. Can they get there 12th championship?  Geno Smith has the most ever NCAA tournament wins with 113.  This fascinating match up will be interesting because these two defensive minded teams will present challenges offensively.  UConn, will have to contain Mississippi State’s front court because the size of the Bulldogs can keep the score low and may cause foul trouble for the Huskies.   UConn passing lane defense and all around discipline will be there asset plus players like Sonia Chong, Kia Nurse, Gabby Williams, Katie Samuelson and Napheesa Collier can get boost the score at any moment.  Were still going with UConn but the game will be close.

Stanford:  Lets keep an eye on the play of Brittany McPhee and Alanna Smith, a deadly combination.  The sharp shooting by Karlie Samuelson can be a factor.  If Coach Tara Vanderveer can find ways to get her shooters free, that will give South Carolina major problems.

Mississippi State: Mississippi State  6’7” center Teaira McCowan controls their frontcourt and 6’5” center Chinwe Okorie off the bench will regulate as well.  Head Coach Vic Schaefer will have to keep pressure on the UConn guards at all times forcing mental mistakes just to have some added advantages.  Can this team stay in a half court offense and dictate tempo?  Looking for recent Associated press All-Americans Victoria Vivians and Morgan Williams to put there team in a predicament to win, if not this game will get out of hand.

UConn and South Carolina will meet in the championship

Previous A look back at the 2017 McDonalds All-American Games
Next The Stage is set….Mississippi St. vs S. Carolina