6’3″ 2018 Anfernee Simmons showed a very smooth game. He displays mid and long-range shooting, shows his length once in the paint and constantly looks to be a factor. 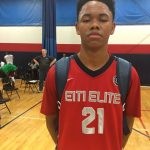 Simon made moves to the basket in which he just blows by defenders and finishes around the rim.  The 6-foot-3 combo guard can make plays either has a lead guard or shooting guard.  Simmons is making noise and we see why.  He’ll have a great season at Edgewater.

Another player who makes it known that he’s on the floor is  6’2″ 2018 G Kevin Simon of West Orange.  Simon just has a knack to get out in the open floor and produce. 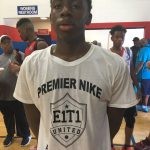 Would like to see him increase his defensive ball pressure and more use of his right to left dribble penetration.  He plays at a high pace; its natural for him to push teammates to keep up with him as well.  Look for Simon’s to maximize his abilities on the court to match his aggressive play.  Some aspects of Simon’s game is not polished yet but he as an upside and will be someone to reckon with in the future.

While i sat watching one game, a player walks in a bit late but made up for it once he got on the court.  6’5″ Ray Barnes of West Oaks had no problems making an impact in games. 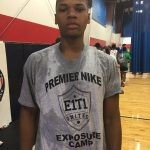 Barnes frame is his key to his success, he knows how to push defenders around and absorbs hits in the paint when finishing.  Looks to compete and just shows a drive to win.  Really like how he raises his game to competition.  I’d like to him work on his long range shooting and pull up mid range shot.  He’s strength is a match up problem for any undersized guard, he can handle and pass the ball plus be very effective when starting transition off offensive rebounding.

2018 6’5″ G Antwann Jones of Oak Ridge, can quietly put good games together.  With versatility to be a PG or slide over and give a couple of baskets at the SG spot, Jones is real effective. 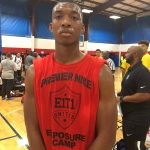 He’s confident when he plays and makes it look easy at times.  He can be a problem to opposing defenders when he uses his length and size.  Look for him to expand to consistently knock the 3 ball down in which will make him a horror to match up with.  Simmons can turn up at any time and give you 30!