Tampa, FL – It’s has been a busy year and we’re anticipating it’ll continue to be busy as the season continues. Bay Area Hoops LLC and Baseline to Sideline collaborated for the inaugural Future Elite All-American Camp giving at the Basketball Warehouse.

Players were invited to to participate in an intimate and intense setting. They worked closely with Player Development and Coach Tim Fields of John Lucas and UConn Alum Coach Rashad Anderson of who took them thru game like scenarios and  strategies. 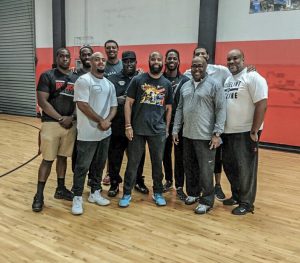 At this inaugural event many of the prospects were based in the Tampa area however we’re expecting the next FEAA events to bring talent from various states.

The ESPN 2020 4⭐️ big man was a force at Future Elite.  The 6’10” UCF committ, who plays primarily on the block facing or back to the basket is your prototyped skilled big with solid mechanics.  Reynolds was most effective off high screen and roles where he created mismatches.  Stretching the floor is limited at this time for Reynolds but look for Reynolds to be the center piece at Lakewood HS.

Sharp, who’s a 4⭐️ prospect of Rivals who missed the Breakdown Showcase last September with an injury but came to FEAA Camp revamped.  Sharp is a high level talent, with natural scoring abilities at the SG position.  He has a gift that most lack, shoots a high percentage from the arc and is able to create offensive opportunities against anyone.  Sharp displayed more athleticism playing over the rim in this showing, this will enhance his game plus take it to the next level along with his recruitment.There was no debate on why Florida was his first offer amongst others.

Watkins is a diamond in the rough.  He has some potential to be a special player this upcoming season.  He continues to display improvements and was the flashiest player at the camp.  Joshua Watkins style of play if tuned up can break down defenders with ease.   Watkins needs to continue to grow as a decision maker and concentrate on establishing a consistent jump shot.  With all this being worked on, you’ll see much more versatility from this long guard.

Recruitment for Delancy will surged this 2019-2020 season, and that’s a strong reflection of the growth in Delancy’s game.  We noticed aggressive efforts to get to the basketball and also make highly educated decision to get teammates available.  From last year to this year its obvious this big lead guard continues to develop and add efficiency to his game.  Delancy still has to make accurate decision when entering the paint, especially going against bigger size player that contest shots at the rim.

Caught our attention with an impressive showing at the Breakdown Showcase in September.  Parker is efficient and showed the ability to make plays.  He’s another player that should expand is skill set and work on conditioning. Anxious to see how he establishes his presence at Kathleen.

His awareness to stay in attack mode is his attractive attribute.  Hawkins constantly put pressure on the defenders and works extremely hard playing defense.  Adding a 3 ball to his mix will help propel his game.  While his physical strength continues to be intriguing, his strong work ethic will get him to the next level.  Hawkins is very much unique and versatile.

Livingston is another player with a tremendous upside.  The loud and aggressive guard plays with a chip on his shoulder and consistently takes advantage of his size and occasionally shows flashes of range out to the three point line.  He is a match-up nightmare on the perimeter coming of screens with his strong body and athleticism.  Livingston has to learn to play well with others but that should come with more experience.

Watching this young man grow and develop is going to be an absolute pleasure.  He’s confident and smooth plus makes the right decisions. Gross’s strong attribute are shooting the 3 ball but he struggled a bit at the camp, however knowing his capabilities we knew it was just a off day.  Still growing and far from a finished product, he has all of the makings of a D1 prospect.

His aggressiveness offensively can be attached to his winning intangibles.  Crews is a strong lefty shooter with a attitude to match. He wants to win and he showed that in games however, showing his demeanor on the court may effect his game at times.  When engaged, he is a problem to opposing foes but will have to continue being strong and vocal at the PG spot.  Crews should be at the top in scoring this year in Hillsborough County and a major piece at Bayshore Christian.

The late-blooming slinky big is starting to get things to click for him now and at 6’8”, he processes soft hands and a touch plus his ability to change ends well can be a advantage.  Wharton is a walking double double but size and his shot selection can be an issue at the next level, so let’s see how this season pans out.

The Rivals 3⭐️ Melendez delivered arguably at the best breakout performance at the camp.  The competitive guard is wired to score. Melendez aggressively attacked the rim, finished through contact and was an excitement in the open floor.  There were a few risky passes that he should cut down. Defensively, he is able to generate steals while playing the passing lanes.  He has lateral quickness, a three-point shot but still his biggest weakness could be his half court patients.  Melendez athleticism is a plus for this up and coming D1 prospect who is starting grab attention and offers . This summer playing with CP25, will be beneficial.

The 6’9” Mali native is an athlete and a solid rebounder on both ends, showed abilities to shoot but still struggles at times.  Sanogo, has a physical appearance and taking contact is not a problem.  His long-term success will be dictated by his ability to improve his perimeter shot.  Injury at the camp slowed his production down and eventually sat out but in his limited time playing, he gave us a glimpse of how he can be a presence on the floor.

Already known as one of the better shooters in the area of Tampa.  Brown is now adding a playmaking dimension but has to find ways constantly run the show, make plays for others while still finding scoring opportunities for himself.  Brown plays under control and was good about making the right pass. Although he’s not exploding with athleticism, he creates a lot of space with his step back jumpers and use of screens to release his three ball.

Trigg may have been the most dominant player of the day.  The two sport athlete attacked the rim and tried to finish everything with a dunk.  Rivals has the 3⭐️ lengthy prospect with offers from USF and others.  He shows a significantly high-level of athleticism but didn’t show a lot of jump shooting in the games.  Trigg should work on extending the floor to add to his already strong arsenal.

Chandler was competitive and showed he belongs in elite conversations.  He displayed a bit of everything and impressed me with his abilities to grasp offensive sets and strategies giving by Coach Tim Fields. Chandler is a kid to watch.

This was our second chance to view Cuevas and he still doesn’t make bad decisions offensively but I think he has the energy and abilities to standout more defensively.  He shot the ball well from deep and with his size and skill at his age, he has a promising future in this game.

Davis has a good motor and scoring instincts especially in transition.  Recently transferring from the DC area, he did well making opportunities without the ball.  He thrived as a slasher and can easily be a stat filler because of his offensive rebounding ability.  Shooting looks to be something he should focus on but overall, his effort was great.

A fair athlete and looks of a good prospect during the FEAA camp.  Lentz had a slow day but you can see his upside especially in his IQ and occasionally long range shooting.  Perimeter defense should be a focus of work but knowing the work he has done over the summer, I really like his upside.