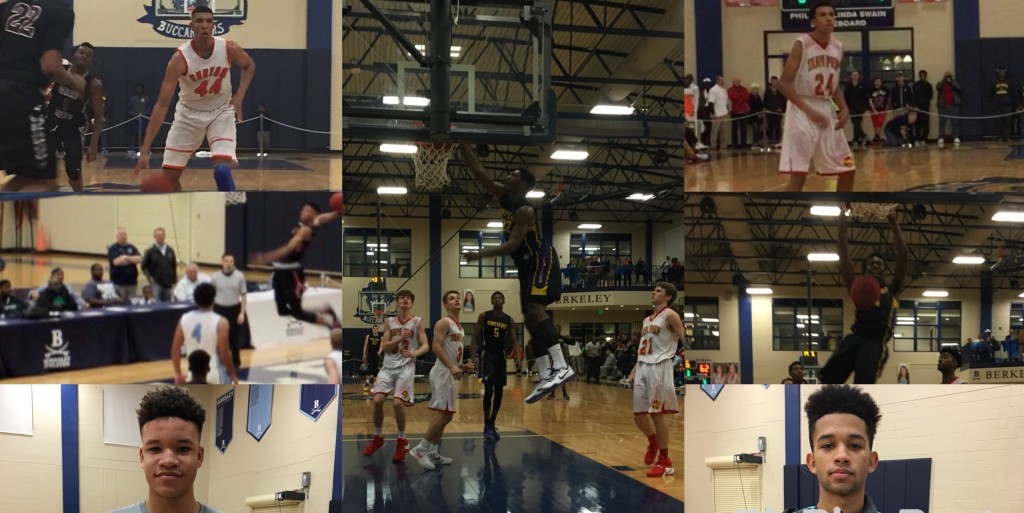 The ARS National Hoopfest wrapped up a stellar weekend of basketball even though bad weather limited teams from attending. However, we were able to see loads of excitement and some good games. Teams included Tampa Catholic, Victory Rock Prep, Tampa Prep, Montverde, Southwind(TN), St. Benedicts(NJ), Bartow, Oldsmar Christian and the host team Berkeley Prep. As a fan you couldn’t ask for more.  Here’s a few of the games we saw:

We watched Tampa Prep play without UConn commit 2016 6’10” Juwan Durham this year against Montverde Academy but Montverde’s length, multiple guard play and bench was too much.  However, Tampa Preps emerging prospect 2016 G Tyson Ward came to play and compete. Ward is very skilled at either guard position, he showed his aggressivenes and his capabilities to defend top gaurds.  Ward mentioned “The competition was great I don’t think there was one bad team there and playing in that tournament was definitely good for our team because our competition will never be that size, the competition made our team a lot better.”  The 6’4” Ward was not afraid of the big stage and showed why he should get some D1 interest and offers.   When ask about the outcome Tampa Preps Coach Joe Fenlon stated “I was pleased with our effort and energy. We always schedule as tough as we can the last couple weeks to prepare for the District tournament. You can’t replicate the competition in practice that we received during the past couple days.”  On the other side, Montverde Academy front court was dominating. With that young front court of 6”10” 2018 EJ Montgomery,  6’8” 2018 Silvio De Sousa  and 6’8” 2018 Simi Shittu teams were unable to match up.

2017 area prospect 2017 F Kevin Knox of Tampa Catholic and2016 G Thomas Dziagwa played at high levels.  Knox skill set for his size is impressive, he can move like a guard at times plus finish with authority.  Know can score in bunches and uses his wingspan to his advantage when in the open court.   ” The first game I didn’t play that well and I wasn’t satisfied with my play. So the second game I came back and played really well.” said Knox.  He most definitely did play well the second game by giving Oldsmar Christian  33 points and 10 rebs.  Knox’s counter part Thomas Dziagwa(Oklahoma State commit) was solid as well dropping 24 pts in a close game.   Oldsmar looked to be playing slower on defense in the first half but as the 2nd half began the Eagles set the tone and scored 27 in the 3rd to fight back to win 77-75.  Its a track meet when playing Oldsmar,  they can score in bunches also.  Oldsmar is quick defensively, they excel in transition and let their defense create offensive especially in the open court.  They’re impressive to watch when they are on all cylinders.  With players like 2016 F Troy Baxter (USF commit) and 2017 SG LJ Figuroa who can explode in the open floor its hard not to play a fast pace. Along with 2018 PG Elijah Weaver who was able to create quick shot opportunities and 2016 SG Jerome Merritt who continues to score in various fashions.  Coach Jordan Fair stated “I thought we played well in the 2nd half of both games. Think we learned against Tampa Catholic you can’t take a team lightly and have to come out focused from the jump. That should help us down this final Stretch to be a little more mentally locked in.  Think we had a good showing and Tampa and hopefully that earns us a little more respect.”