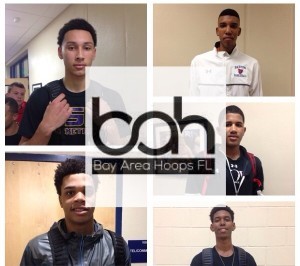 Again ARS Rescue Rooter National Hoopsfest comes to the Berkeley Prep (4811 Kelly Road in Tampa) January 22-23.  The National Hoopfest began in 2011 and gives a portion of proceeds to St. Jude Children’s Research Hospital.  Hoopfest tournaments take place in Memphis, TN; Tampa, FL and Salt Lake City, UT .  The talent level has been competitive and this years talent is expected to be the same.
The Tampa area has high level talent that will be put to test against some very good teams from other states.  Florida teams will include Tampa Catholic, Oldsmar Christian, Berkeley Prep,  Montverde Academy, Tampa Prep and Bartow High. Out of state Prep programs will include Southwind (TN), Memphis Germantown(TN), Huntington Prep (WV), St. Benedict’s Prep(NJ).  This event is loaded with ranked talent!

A few players to watch: