The 3rd annual Red’s Super 64 Showcase took place at Florida Southern College on October 3rd.  The event featured some of the top talent around. Here is what we saw:

Many post players shined that day and the most impressive was 2017 F Grace Marko of Boca Roton.  She did damage on the block, extended the floor and showed she can score when she wanted too.  Marko put together a string of three’s that caught our eye and as the day progressed she just got better.  She’s not a bruiser type of player, she’s more of a soft touch finesse athlete.  As she continues to work on  finishing through contact  she will push her game further however she is definitely a player to watch. A similar player in skill but more active in the post was her teammate 2017 F Rachel Levy also of Boco Roton HS.  Levy really worked the paint, she plays with the ball above her head and was open alot because she just beat the opponents up the floor for easy baskets.  She’s skilled in the post I’d like to see her work on her 10-15 ft jumper.  Levy will be an assets at the next level.

Rarely you get chances to watch players display talents on both ends but 2016 F Alexis Allen of Brooks De-Bartolo was dominant.  With interest from Flagler, Thomas University, St. Pete College and Cleveland State to name a few, she is well known in the area.  Allen has power, an IQ and drive.  She will take charges on weak side help plays, plus block shots as a rim protector; at 5’11” that’s impressive.  It is difficult to defend her because she’s so active on the floor.  Allen’s vocal tendencies help her teammates extremely.  You got to love her game.  As we continue focusing on the post players, 2016 6’2” F Tatijana Ferguson of Boca Raton who is the teammates of Levy and Marko showed a big time upside.  Her frame and strength stands out and gives her an edge to perform down low.  Ferguson makes space and uses both hands efficiently.  She should work on making her second jump faster and perfecting her pick and role action.

Players you need to know:

2019 PG Mya Guisto of Community School has a gift! Balanced, controlled and far more advanced than the average PG.  She capable of creating separation or passing defenders with her dribble moves, and she uses her floater well.  She didn’t shoot as much that day but it’s there.  Guisto is evolving and can be one if not the best PG in the state.  She’s young and coming of age, Coaches should be taking notes now!  Every team has a “do it all” player who hustles, grinds it out or just gives it up for the team and 2017 G Brianna Mathews of Strawberry Crest is that player.  With a glance we noticed her efforts to be in each and every play.  She occasionally will shoot a three but her upside is her defense.  Scrappy, competitive and tough describes Mathews approach to the game.

Up and coming PG that Coaches should stay on is 2018 Nakeria Reed of Seffner Christian.  She keeps her head up, looks to penetrate and looks to push the ball in transition. Reed utilizes her shoulders as she goes right or left into the paint and positions herself to be visible for open shots.   Not to be forgotten was 2016 SG Deja Turner of Plant HS.  She started off slow but once she found her rhythm she showed off her scoring abilities.  Turner is an athletic guard that can turn it up at any time.  She’s a player that needs to touch the ball often or may get lost in the offense.  She’s an up beat player, she’s tough and  she’s vocal. 2017 F Kianna Chew of Palm Harbor University may have been the most interesting player there.  Chew is still growing as she grows she’ll learning her place on the court and she’ll be effective, she is coming along.  She has tools and talents,  and at 6’3” that’s undeniable.  2019 G Zahria Jenkins of Crystal River HS is another player like Kiana Chew that’s going to be special.  She is fresh and new, keeps a good attitude to the game  plus, she’s  a hard worker.  I can’t wait to see her develop.  Jenkins will be a promising prospect.  Even though I didn’t get a chance to speak with 2016 G Samantha Gilbert of Oldsmar Christian we still got to watch her compete on the floor.  A working guard with a confident game who plays with something to prove at all times.  A player to watch this year.

Jewel of the day: 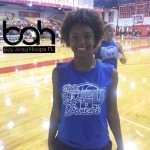 2016 PG Mikala Canada of Land O’ Lakes made play after play.  Her skills at the PG will take her to the next level.  A true general who is a pass first type player.  Doesn’t give up on plays and she’s tough as nails!  They say she transferred into the state and Florida should be happy she came.