When it comes to finding talent in Florida, Tony Perkin’s Comin for that #1 Spot showcase is always on the top of the list. Whether it’s UCLA commit Prince Ali or FSU commit Jonathan Issac, this event produces talent.  We had the pleasure of coming out to see which guys were chasing that #1 spot.

2018 6’3″ SG Berrick Jean Louis of Lehigh HS was the most impressive athlete in the gym. Louis showed his abilities in transitional situations by playing over the rim and his defensive skills. I thought I’d need a swivel for my head just so that I wouldn’t miss 2016 6’4″ F Logan Hodges of Coral Springs Christian. This young man played with intensity, he played as if it would be his last game. Hodges had plays where he dove on the floor for loose balls, gave his body up in the lane taking the contact to get layups or dunks. He’s a blue-collar type of player with abilities to score off the dribble capable of making assists and securing the rebound. He will be stat filler at the next level.

2018 6’6″ Immanuel West of Norland HS, was a player that displayed different types of scoring; from dunks, to a comfortable mid range shot. As the day progressed, West continued to display versatility in his game. At his height he is confident in his ball handling and post presence. You should hear more about West as he makes noise in the state of Florida. A similar player but a tad bit younger was 2020 6’3″ SG Dudley Blackwell. Blackwell has high ceilings in the game of basketball. His smooth approach to the game and high confidence levels he’s definitely high major prospect in the making. This is my third time watching Blackwell perform at high-level. He has gotten better with dribbling in traffic, pulling up from long-range and on the defense end against premier guards. I can’t wait to hear about him at Sagemont School.

Duncan DeMuth who’s a 2018 6’8″ SF from Seminole HS. I have watched Duncan Demuth twice and I think I’ll be seeing much more of him after these performances. He is an interesting player because of his length, shooting ability and no back down attitude. He’s very solid offensively. DeMuth can easily be in the high post, on the block or face up to shoot or drive past a defender. Another high flyer type of player but efficient on offense was 2018 6’4″ SG Eunique Arnold of Booker HS (Sarasota,FL). I watched Arnold go on scoring spurts of 6-8 points multiple times. It seemed at times he was unguarded. He can work more on his outside shot but his aggressiveness to score outshines his small weaknesses. He’s a player to watch.

These guys kept me looking:

2017 6’0” PG Herman Robinson of Highlands Christian has “Floor General Skills”.  Robinson demanded attention, was very vocal and tried to get players involved.  After speaking with him between games, Robinson is strong in his speaking and looks to be as knowledgeable and willing to learn as he is on the floor.  I’d like to see him shoot more when needed. Good player!  I loved the game of 2018 6’3” G Steven Quintero from Coral Springs Christian.  He was composed at the guard position and processed a better handle than I expected when I watched him in full court action. I didn’t think he shot the ball well from deep but his mid-range was very effective.  2017 6’6” SF Shaquille Harris of American Heritage HS started slow but once he warmed up he was a productive.  He looks to rebound and start secondary transitions to give him opportunities to run and be effective scoring.  Harris should work more on being a scoring threat in half court sets at all times. He’s a finisher at the rim when he accelerates in the paint.  2017 6’2” SG Joe Stone of Riverview HS (Tampa, Fl) stood out late in the showcase he’s coming off of an injury and still pushed himself to be efficient. He was impressive,  he glides through people with a dribble that takes up lots of ground.  Stones uses his talents to rise over players for open shots and layups, he also plays over the rim when he’s in the open court.  He didn’t shoot much but he should because he can get it off whenever he wants.

2020 6’4” F Scottie Barnes SFE has a promising future.  Confident is the word that sums up his game.  Barnes is not afraid to be the best on the court.  He made difficult shots look easy, played PG, worked the block and he was a distributor.  Watch out for him Coaches! Now with out missing a beat, 2020 6’1” PG Malik Hinson of Team 360 may have been the most consistent and productive player at a position.  Playing the PG  spot at his size was eye opening.  He was able to move easily, put players in scoring positions, knock down the long ball and blow past guys smaller than him.  I was really impressed.

*ALL PICTURES taking and originated by BAH.

Players that caught my attention: 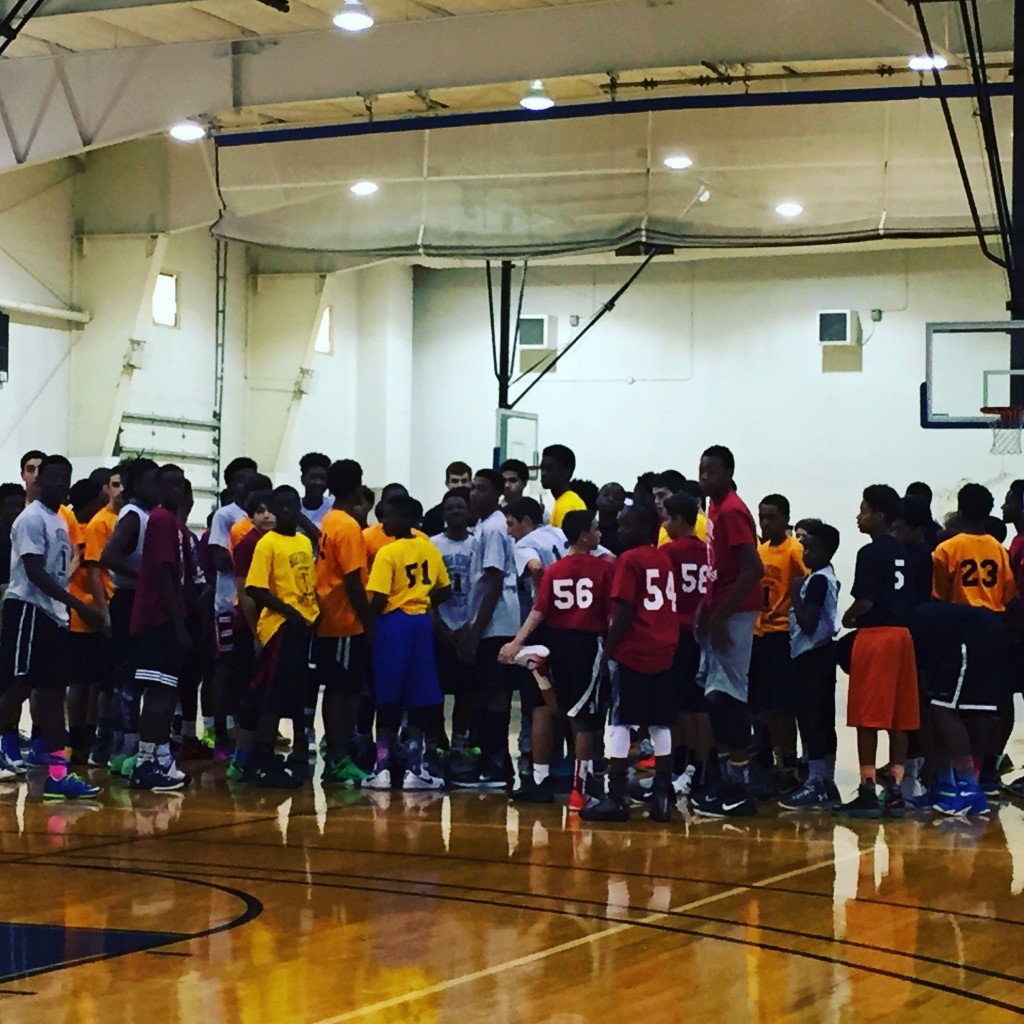