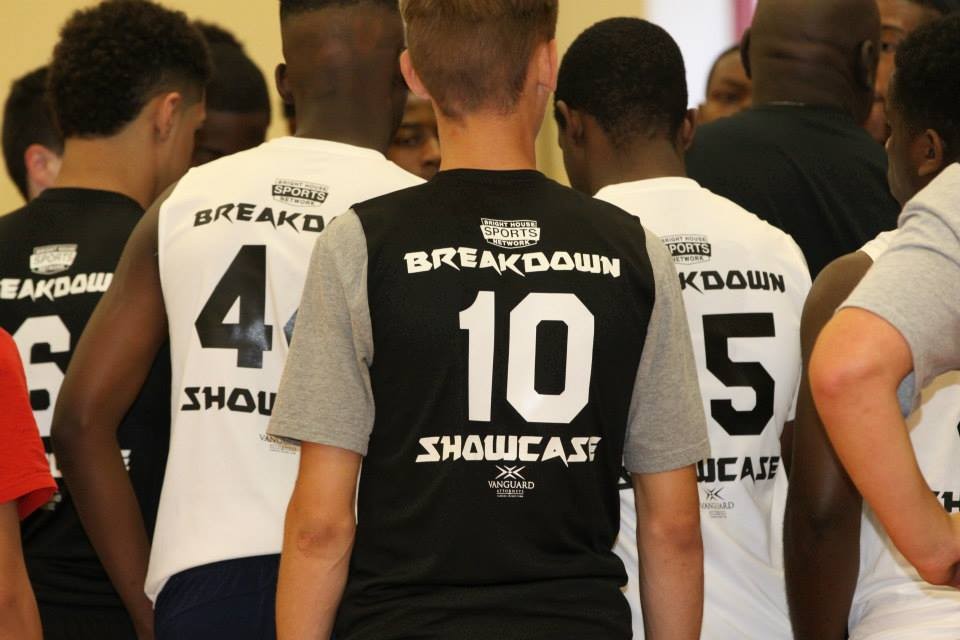 The annual 2015 Bright House Sports Network Spring Breakdown Showcase was back in full force.  The numbers were larger than normal for the spring event and there definitely was no shortage of talent.  This event was presented by Bay Area Hoops and Big County Preps and sponsored by Vanguard Attorneys.  Basketball fans, parents, coaches and scouts made it to the University of Tampa to watch some top area talent match up in this much anticipated Showcase. Approximately 60 players participated in this one day event that attracted a number of talented players from the Central Florida area.  We had the opportunity to witness some really talented kids.

In segment 1 we will give you our top 4 players.  Here they are:

One of the best players we saw on Saturday was 2016 6’1”PG David Jones of Leto HS. Jones is arguably the best PG in the Hillsborough county area.  This is Jones second appearance at the Breakdown Showcase and he gets better and better at each showing.

He literally dominated all PG’s. Highly skilled, very athletic for a PG.  Jones handles the rock superbly and attacks the rim with an occasional dunk. Jones didn’t mind sharing the ball as well and looked to be a good teammate. Jones was able to push the rock from base line to baseline with speed and excels at beating defenders to the cup.  David is off his best season at Leto HS averaging  22.1 PPG, 5 APG, 9.6 RPG, 2.2 SPG.  He will be an anticipated player to watch in his senior year.  Definitely a mid-major D1 athlete. This kid can PLAY!

2017 6’4” SG Jonathan Bryant II of Oakleaf HS dominated opponents with his size.  At 200 lbs he is a load to handle. He was able to plow through defenders with ease, created space using his shoulders and the ability to shred off opposing screens.

Bryant looks to be confident, has good footwork and can step outside and knock down the long range jump shot.  Bryant has a huge upside with his development and looks to be a promising Division 1 college prospect. We look forward in seeing him in the future.  A great asset to any team.

2015 6’6” SF RJ Palmer of Wharton HS may be the most slept on athlete in Hillsborough county.  A college ready player.  Plays with no facial emotion just gets the job done.  Don’t let the smooth taste fool you, Palmer can score without a problem.  We’ve seen Palmer play on several different occasions and he continues to impress us every time. Looked good in transition, really ran the floor well and also was able to pull up for numerous three point shots in transition.  Palmer can either get to the basket or he can shoot from the perimeter. One of the most athletic players we saw all day at the showcase.

We knew what was in store from 2015 6’6” SF Payton Wilson of Tampa Bay Tech HS. A competitor with confidence.  Wilson has so many good things but the obvious is his size, his strength and his mindset to be a scorer at the SF position.  Wilson has abilities to finishes around the cup and he definitely can stroke the ball from anywhere on the floor. Wilson’s play earned him a spot in the all-star game but cramping stop him from competing.