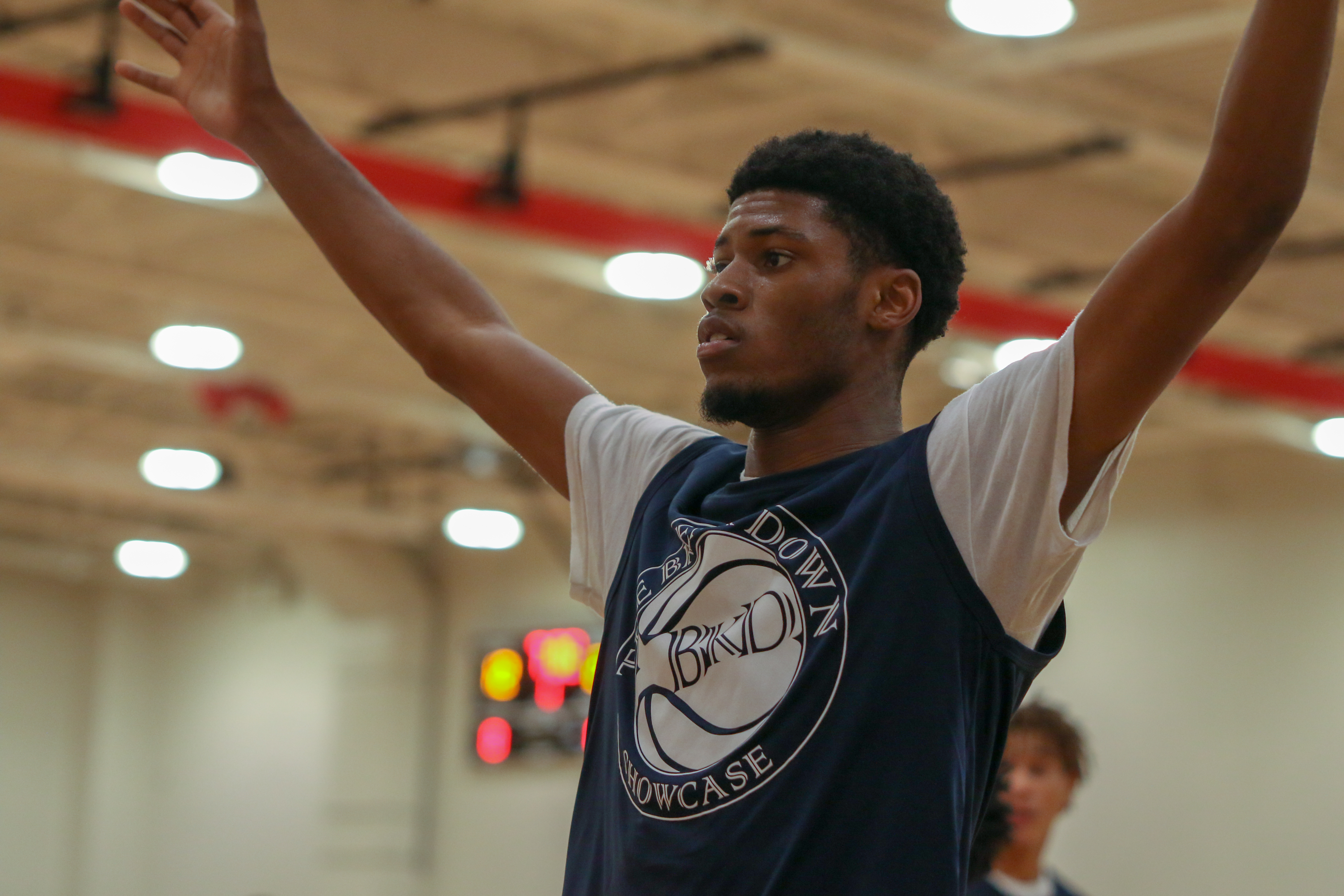 Tampa, FL — Typically on a Sunday; during football season you’d expect football fans to be glued to their television watching America’s game.  That was not the case for last Sunday’s  7th Annual “The Breakdown Showcase” giving by Bay Area Hoops LLC and Big County Preps that had more than 125 players in the gym @ Carrolllwood Day School for  2 separate sessions; morning was 9th-12th grade and afternoon was 5th- 8th grade.

The Breakdown Showcase, a premier basketball players scouting event in the Tampa Bay Area  is where you will find multiple potential players with talent pools from D1, D2, D3, NAIA & JUCO, some who are nationally known and others who are yet to make their name known.   This is where your basketball play and skills can verify or introduce your name to national and state scouts, college coaches and other media outlets in attendance at the event.

Here is the breakdown of upper classmen: 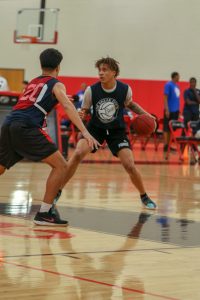 He’s an exceptional athlete who can score the ball naturally using instincts. Tracey who is becoming a national name, continues to improve as a young promising basketball player.  Tracey a transfer to Oldsmar Christian School from Riverdale HS (Fort Meyers, FL) has leaping abilities and, displays strong attributes on offense but what’s noticeable is his knack to lead a team from the PG spot.  His versalitity caught our attention a few weeks ago.  After some brief conversations with Tracey, he has proven to us that he’s humble and more than just an athlete with potential.  He knows he has the tools to be something special and doesn’t mind accepting any role to better his team.  With his skill level, he looks extremely comfortable at either guard position and his shooting fundementals are visible.  When open, he is not afraid to shoot the jumper and be a “go to guy” but his defense will have to improve as he contends with faster and groomed guards at the D1 level.  On a few plays he held himself accountable for his defensive mistake, which is a sign he can make the adjustments on the floor.  Now, the question for this Rival’s 3 star prospect will be; can he meet the expectations and do the work necessary to become a high level player  in the future? 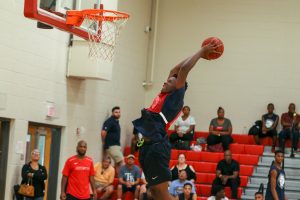 Gavin had no issues when it came to finishing at the basket! He’s very assertive when roaming the interior on offense or defense and makes use of his good hands to dominate near the basket. Gavin maybe undersized to play a 4 position, but his aggressive nature and rim running abilities still makes him attractive to some college programs.  When he rebounds the ball he can be compared to a Dennis Rodman type of player, he hustles too outwork his opponents and he anticipate rebounds extremely well.  Not a back to the basket guy, he will make his moves by beating bigger slower bigs up the floor.  I’d like to see Antoine work on and use  his jump shot to become a  consistent threat off the dribble.  His work from the high post will be relavent this up coming season at Tampa Bay Tech HS so hitting the high post shot or elbow extended jumper will have to be present. 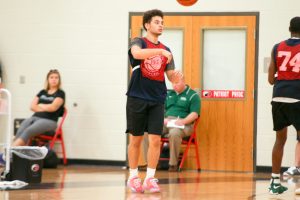 When playing the point guard position there are some qualities necessary  that will make you successful and efficient.  The demand and accountability is high but under the right tutorial and surroundings its very possible, Whitlow has those qualities.  Whitlow unique ability to handle the ball, direct traffic and utilize his vision while not overdribbling as the primary handler is impressive.  His size as a PG can be a gift and a curse; if it is not managed it can damage his speed defensively or be affective powering past smaller guards. However, he is adequate when passing the ball ahead in secondary transitions and abilities pushing the ball weaving through traffic or taking bumps in the paint to finish.  He can hit the open shot which is one of the most important thing because most young point guards fail in the perimeter area of shooting.  As he slims down adding more muscle mass to help him defensively and continues developing a consistent pull up mid range jumper, that will enhance his game.  Can’t wait to see him this year!

He has enhanced his game. He’s shown that he’s a productive shooter in previous viewings and at the Breakdown Showcase he displayed his ability to score off the dribble.  Crews has a slender build, good hands and knows where that arc is!  This is our third viewing of the floor stretcher and what’s most impressive about Crews is his productivity on the floor.   Although, his physical size is small,  he makes use of the lighter weight to run through screens and tire out opposing defenders.   In the half-court set, he is a definite threat plus he can rebound the ball.  We like the way he sticks to what he does well and consciously stays displined to the game plans.  This year at SCA who competes in the SIAA Confernce (not associated with FHSAA) will display  the University of North Florida commit’s talents and we will see even more of what Crews has to offer. 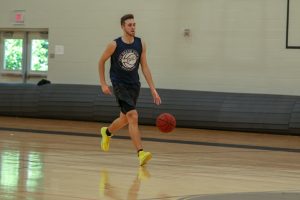 There’s not enough to be said about a player who can play multiple spots and still be affective.  Bartlett is a deadly shooter with range.  Watched him numerous times pull up from beyond the arc in transition or be available in set offenses as a big target coming off screens.  While he continues expand his game and be more of a presence on the defensive side,  Bartlett will be a steal for a college program!

Looking for a finisher? Hardy is the guy who can give his team a spark or can make an impact play.  He can finish either with alley-oops or whenever he sees a clear path. At the present time, he still is establishing his scoring from the perimeter but his improvement of the catch and shoot is visible.  Furthermore, Hardy has colleges calling him now and we expect him to sign soon. 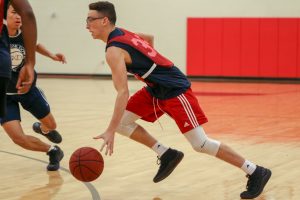 Gavin a crafty ball handler with significant BOUNCE!  Don’t be fooled, this kid can play.  Gavin’s game was going the whole day and we saw a distinctive set of skills as he sliced up defenders and DUNKED a few balls. I’d like to see him work to solidify his defense and add strength.  I believe he can be a contributor to a college program. 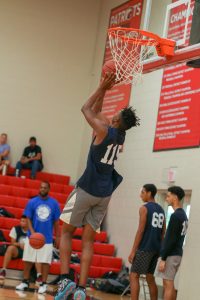 Out of nowhere, Gibbs can add an aspect of excitement on either end of the floor!  He is  special helping on the weak side of any defense because of his instincts to get the ball at its highest point.  Gibbs must improve on his shooting and his shot selections.  His eagerness to be an elite prospect drives Gibbs to be a major factor on the floor, so beware when he is in transition because he will punish the rim over many defenders. STOCK RISER! 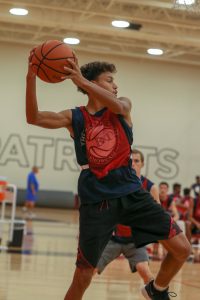 Lee has grown in height and abilities. With the athleticism at his size and defensive presence, Lee brings so much to the table.  This will be a good year for the up and coming prospect. 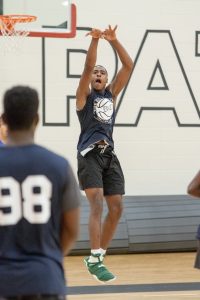 Jones plays with grit, passion and accountability.  Has no problem playing his role, from screening to freeing others to scoring on his own.  Jones is a college player and still young  enough to show it. Watch him grow! 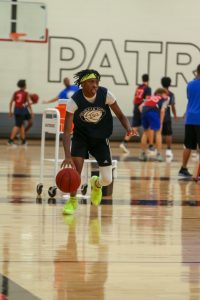 MID RANGE KILLER! Ro Burke has upside because of his young age and IQ of the game.  Burke is just scratching the surface and has he continues to live in the weight room and add to his slender frame, the already competitive Burke  will become a good college player. 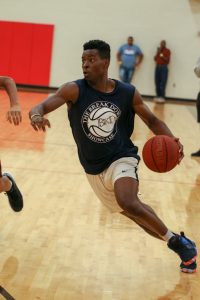 Godwin is a stat filler ball player.  An active motor and his athleticism makes Ilumoka a attractive player at the next level.  He can be physical and tough but able to show he can also produce by scoring.  Ilumoka should continue to improve on the defensive side and tweak up is scoring alternatives.  Godwin is as tough and sturdy as they come. 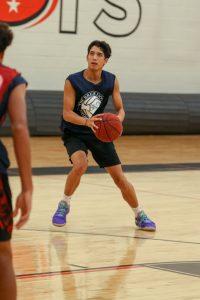 Ziegler has an outside shooting touch;  he showed his high level of athletic ability by displaying that he can finish at the rim and compete.  He has size and good court vision, Ziegler can make a highlight at any time. His jumper needs work and he is the first to admit it, as his elbow gets under the ball more, it will straighten out his shot. 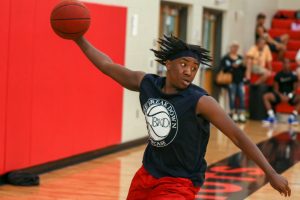 Brown has stepped up his conditioning and it is showing a considerable change in his game! He is a legit PG that will make someone better while running an offense.  He gets in and out of small places and shows he has a skill set that is needed on a team. 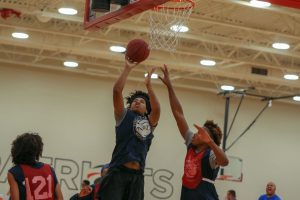 Sharp can make space with his frame and be a consistent component when needed offensively. Sharp comes from a long line of ball players and has potential and will continue to improve. 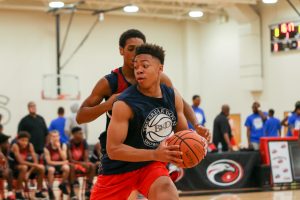 Hancock has bulked in muscle since our last viewing.  He got up and down the floor and made his presence known in the post.  He didn’t show much shooting but he still continued to be effective. I’d like to see him work on extending floor.

Ottman played well when coming of the dribble and he can finish above the basket once in the paint. He gave us a full effort all day. 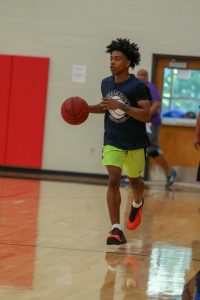 Berrien has a high motor with a fast dribble in the open floor.   His presence on the defensive side can make many guards uncomfortble.  I’d like to see him limit his turnovers and work on a consistent long ball. 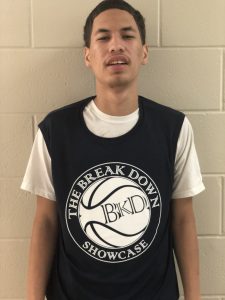 Romero looks to make a difference at all times on the floor.  He wants to make the right basketball play, he plays with energy, he moves the ball first but he wont hesitate to take the 3. 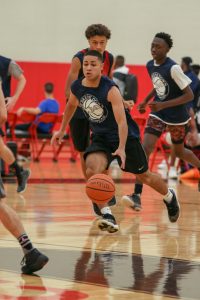 Mr. Ortiz improves every time we see him and he is becoming a solid PG.  He looks to create off the dribble by using his frame and takes contact after penetration in the paint. Once he improves his outside shooting and become a bit more patient, Ortiz will be something to watch.