Buffalo, NY– One of WNY Premiere basketball camps took place at the University of Buffalo on August 3rd.  We decided to see who came to play. 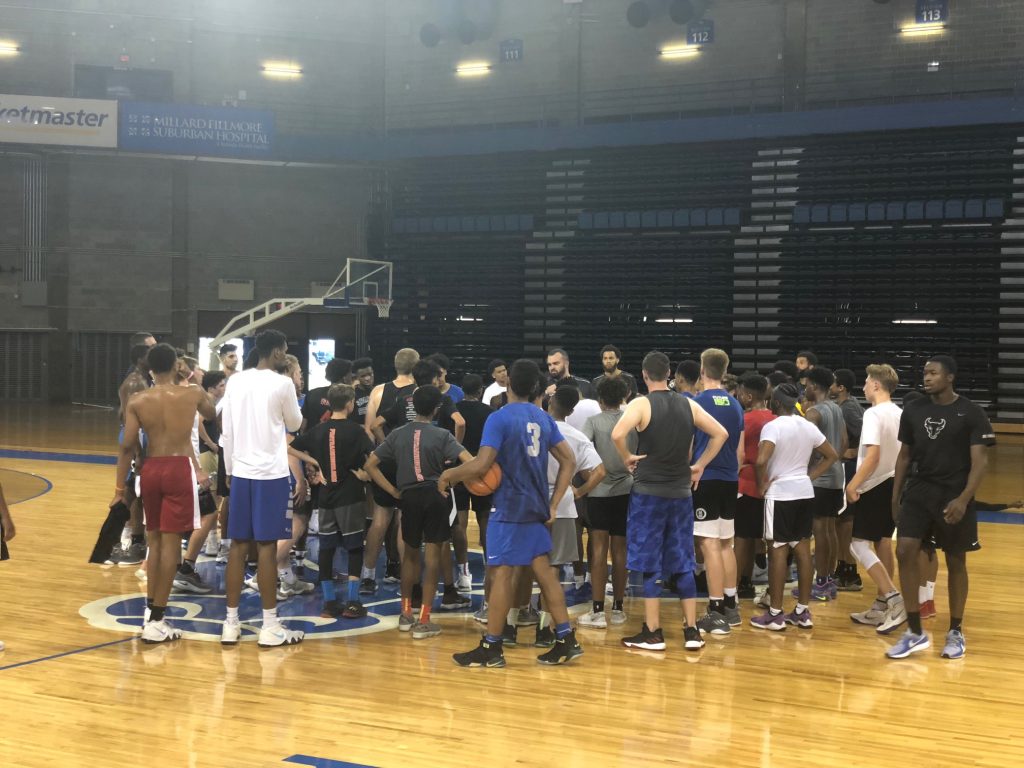 Willie Lightfoot Jr. – 2022 5’10” PG of Albany City Rocks is a very underrated lefty PG right now with a massive heart for the game. Lightfoot plays with a competitive edge and intensity which is all combined in his stocky size.  Lightfoot’s ball handling skills and control on the floor was impressive.  This was our first viewing of the elite guard Lightfoot and we expect his name to ring bells on a nation scale as a nice prospect in the making.  He maybe the best PG coming out the 2022 class in the surrounding area.  We’re anticipating his upcoming Freshman year at Niagara HS to see how much of an impact he will make.  Overall, Lightfoot is a playmaker who can score and direct a team.  You might be watching the next Johnny Flynn coming from this area.

Jalen Bradberry – 2022 PG of Albany City Rocks and Niagara HS is a familiar face to us. We observed him at the EYBL Session in Hampton, Virginia and he looks has if his starting to mature mentally and physically.  His ability to stretch the floor beyond the arc stood out the most.  Today, Bradberry displayed play making abilities and a competitive nature at the PG spot.  Communication will be key for Bradberry.

Romaire “Ro” Burke – 2019 6’3” G of Bay Area Hoops Elite (BAHE) out of Tampa, FL was impressive.  Getting his hands in the pocket of opposing guards, making good offensive decisions and showed a nice pull up game.  Burke got out in transition and created off the dribble penetration without a problem.  He has a linky size but uses his length to his advantage to take contact well.  This 2 way guard can make a difference at a college program.  He’s a young upcoming Senior who is considering Post Grad.  Coaches, Burke is proving he belongs in the conversation of kids to watch.

Messiah Graham – The 6’5” 2022 SG of NEBC Buffalo is just scratching the surface in his development.  Graham plays above the rim and runs great in transition plus he’s effective rebounding on the offensive glass to be an elite level player.   Ball handling and consistency from beyond 12 feet are things that will take this prospect game to the elite level.  After making MVP honors at the Jr. Pangos AA event a few months ago in California, it’s easy to see why he’s making waves in the Western NY area.  You’ll be able to watch Graham in his upcoming season at Timon HS.

Kidtrell Blocker – a 6’4” F of the 2020 class from Aquanis HS in Rochester, NY was solid all day in drill work.  Blocker is athletic, has long arms, able to create his own shot and is very active in the painted area.  Rebounding on both ends, altering shots and finishing around the basket is what stood out from Blocker.  Shot consistency and development from beyond the arc will help his growth.

Cameron Ness– 2019 6’9” F from Highland, NY was one of the more fundamental big men we watched.  At 6’9”, he shows a nice frame, a strong presence and does all the little things in the paint.  Ness can finishes hard with either hand at the rim has he showed with some thunder dunks but can work on his mid range plus conditioning to add to his game.  He also needs to show his shot ability around that 10 ft range.  However, Ness is has ready has anyone big at his size to be at the college level.  He will continue to developing has a legit power forward and hopefully be a contributor at some lucky program.

Dajion Humphrey– The 6’3″ 2020 G from Southfield Christian HS was one of the top players there.  Humphrey was a hard check for most defenders because of his abilities to put the ball on the floor and use his vision to see the court.  He was most effective when he made use of his length to shoot over players.  Humphrey has an elite level game and shows he can be a stand out player when you watch him.  As he gets stronger, look for his game to take the next step.