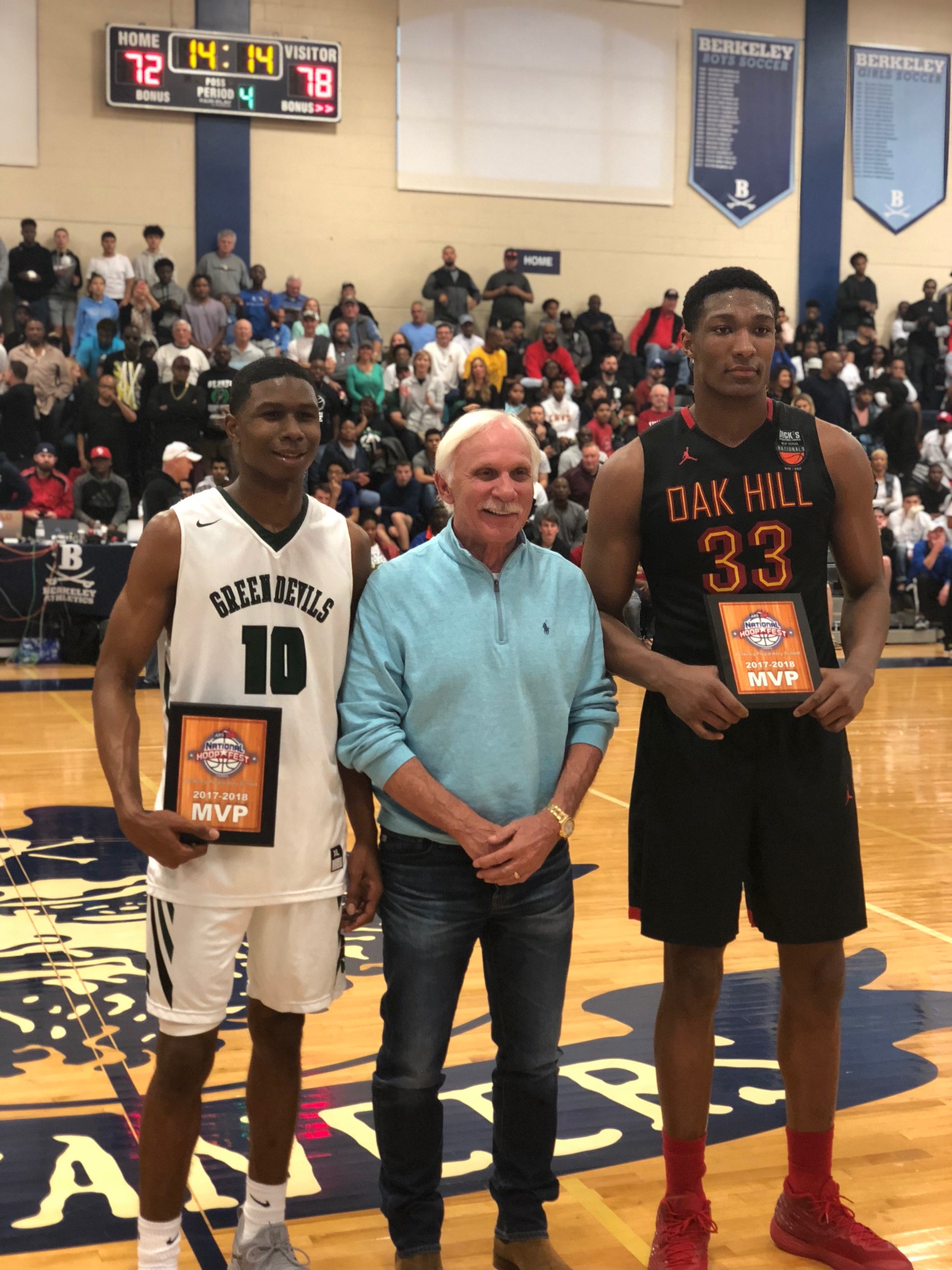 Tampa Bay, FL – The Tampa Bay area has been the yearly location for the talent loaded ARS Rescue Rooter Tampa National Hoopfest. With strong individual and team performances, the Hoopfest kept fans in suspense.  Take a look at what we liked.

Huntington Prep’s F Jaemyn Brakefield ended with 28 points.  Ranked #20 in ESPN 2020 class, Brakefield’s was all over the floor showing his deep range and athletic abilities.  Sharp shooter Cashius McNeilly gave 18 points (all 3 pointers).  Not to be overshadowed, OCS has some good highlighted players such as 2018 G Ricardo Clouden who finished with 13 points and 2018 SF Tyrese Williams with 12 points.  Clouden is a strong off guard that is skillfully capable to get to the rim and create; while Williams made big plays finishing over defenders.  OCS with new Coach Alex Arias are in a rebuilding stage but still have the same principles.

West Oaks 2018 PG Tyrieke Blakeney was very crafty with his ball handling which was a big issue for Berkeley Prep.  Blakeney ended with 29 points.  Shelton Migual finished with 13 points with most of them in the first half. Big fella Rifen Migual ended with 12 points and had a better performance in the second half.  West Oaks made the game harder then it should have been, at the start of the game Coach Renaldo Garcia’s team caused Coach Kenny Gillion to make adjustments.  Berkely Prep’s  2020 Keagan Karnes dropped 22 points mostly from beyond the arc.

Hoping to see IMG’s undeclared ESPN #8 overall Anfernee Simons who didn’t play due to sickness.  Even without Simon, fellow back court mate and Maryland commit Eric Ayala picked up the slack contributing 21 points. Ayala who is ESPN’s #91 overall is a big guard with vision who can control traffic.  Jaylen Sebree helped with 13 points and sleeper standout for IMG was PF Simeon Kirkland who finished with 10 points.  In the loss, Montverde Academy’s 2018  G Jermaine Cousinard led his team with 17 points while Morris Udeze banged his way to 16 points and Kevin Zhang ended with 13 points.

Going 2-0 for the weekend, Coach Arkell Bruce of Huntington Prep’s got the most from 2019 SF Quinn Slazinski (18 points) and 2018 C Kenny Nwuba (10 points).  HP was to much for Victory Rock.  Speed and agility was very visible. Victory Rock’s Michael Durr ended with 15 points.

This game started off close but late performances by IMG showed to be the difference.  2019 Jahmius Ramsey notched 18 points and 2018 LSU commit Darius Days  with 13 points played inside and out giving 2020 New Jersey PG Noah Farrakhan (2020 ESPN’s #13) the chance to be active in transition.  Farrakhan ended with 12 points and was key in the second half.  Farrakhan’s ball handling and creativity in the open floor was phenomenal.  West Oaks Tyrieke Blakeney finished with 14 points while Rifen Miguel gave 12 points and Selton Miguel with 11 points.

This was definitely the game of the weekend.  #2 ranked Oak Hill was pushed by St. Petersburg HS and the 42 point outburst performance by Ole Miss commit Serrell Smith.  Smith went completely off on Saturday pushing top ranked guards to the limit.  Since our individual viewing at Tampa’s “The Breakdown Showcase“; Smith has shown his capabilities to be a major D1 prospect.  ESPN #7 overall and Kentucky commit Keldon Johnson finished with 19 points but only 4 points came in the second half.  Even though Oak Hill was without standout PF Billy Preston who has signed with European Club Igokea, the Kansas commit and McDAAG pick David McCormack  took up the slack.  McCormack, he finished with 12 points and was the X-factor especially in the paint taking full advantage of the size of St. Pete. Florida commit Keyontae Johnson paced himself with 14 points..  There was some good play from St. Petersburg High School’s Senior PG Tai Strickland, who has made a name for himself and looks to be a solid D1 future player.

Montverde’s Duke commit RJ Barrett continues to impress me.  I first saw him 3 yrs ago at an event and throughout the years I’ve seen him continue to improve every time.  Barret can easily change a game and the impact player has grown in size, quickness and abilities. His court vision is becoming fantastic and he continues to make others better.  In an lopsided victory against Berkeley Prep, Barrett had 14 points but his presence on the floor did enough.  Berkeley Prep’s Keagan Karnes dropped 9 points.