Chicago, IL – This past weekend John Lucas’s Camp Right Way gathered over 100 participating players ranging from the class of 2021-2024.  Quest Multi-Sport facility was the location that showcased the future generation of top prospects.   Athletes got pushed in skills and drills plus to reintegrate their learning, Coach Lucas quizzed players on the knowledge provided by the Coaching staff.  Check out who impressed us the most this past weekend.

2021 6’5″ F Nana Boateng (Toronto, Can.) – A very sizable player for his age that benefits him against his peers right now.  Boateng strength to power defenders and show dominance attacking smaller players was impressive.  To be honest, he could be the player you don’t want to miss.  Boateng has the tools, footwork and skill to be an attractive prospect but that will be determined if he can continue to develop his shooting and work on his dribbling.  We hope he hasn’t maxed out in his growth so he can mature into something special.  Boateng with all factors adding, will be potentially a players to watch.

2021 6’9″ F Javonte Brown (Toronto, Can.) – Brown stood out to me because he was so raw in skill but showed he had the capabilities to be a presence rim running, shot blocking or drawing doubles for passes out of the post.  For his age, he has the fundamentals and IQ to play his position on the block.  He knows how to ask for the ball in specific spots with his back to the basket plus his vision for a big is pretty good.  Once Brown adds strength and a consistent shoot within 15 ft, he will be on many Coaches radar.  Brown has a competitive nature to rise and take challenges which showed throughout the camp, so don’t take him lightly and lets keep an eye on him.

2023 5’10” G Christopher Lockett (New Orleans, LA) – While standing at just 5’10”, the Louisiana prospect is effective on the floor. He was active attacking the rim, he raised eyebrows with his basketball IQ and displayed effort in drill stations.   While Lockett is far from a shined gem, we expect to hear from the Louisiana prospect in the future.

2022 6’5″ G/F Damonze Woods (Amarillo, TX) – I was drawn to Woods at first site, his physical looks, length and work ethic was extremely intriguing.   Woods could score with or without the ball plus create scoring opportunities off his perimeter defense.   Processes good hands when catching passes in fast-break situations. As with most players at this stage and age, he’s still maturing, adding on to his game and trying to play the right way.  Weight and strength are a must but he will get that soon.  I’m projecting Woods to potentially exceed 6’7″ and draw more interest next year. 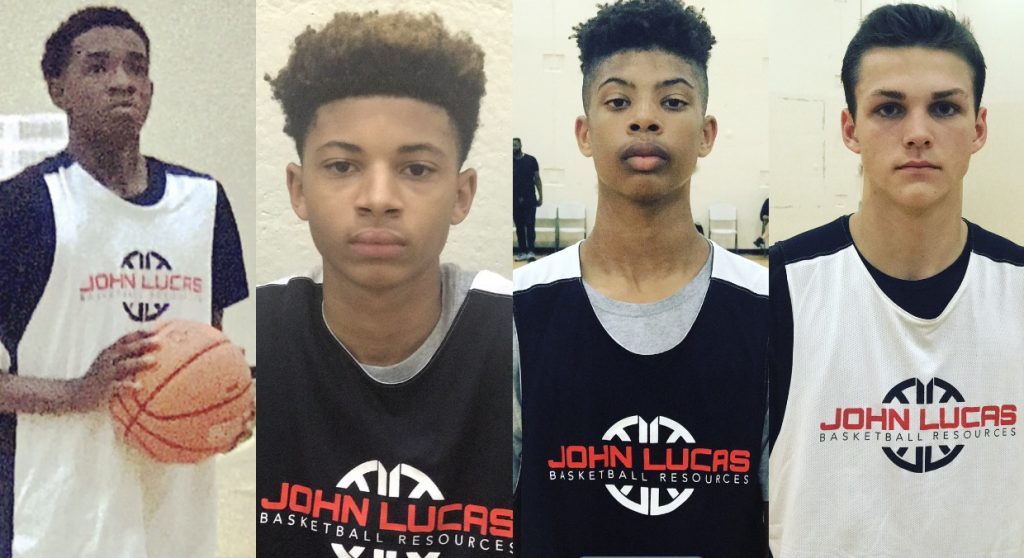 2021 6’2″ G Kyle Duke, (Toronto, Canada)  To put it simple, Duke was the most aggressive on and off the ball guard at the camp period!  I saw a player dominate in multiple situations on the floor offensively.  Displayed good balance and made efforts to keep his defender moving left and right. While he continues to grow, we hope he develops on the defensive side and become more of a vocal leader when needed.  Duke carriers a heart of a champion and definitely can go!

2023 6’0″ G David Delancy, (Pembroke Pines, FL) – Awareness, vision and a court presence are parts of his game that will separate him from others in his class.  Sometimes can get overlooked because of his smooth demeanor.  However, Delancy is mentally tough and versatile enough to play the 1 and 2 comfortable at his age.  A very noticeable lefty but should work on camouflaging his strong points to maximize his offense, this should make him more of a threat then what he really his.  When he is in tune on the court either he makes players better or can impact a game offensively.  I’m anticipating a bright future for this young man.

2022 6’2″ G Chanse Perkins (Houston, TX) – The broad shoulder athlete didn’t disappoint at Camp Right Way last weekend. He’s built to be quick laterally which gives him advantages to get around defenders especially when penetrating to the rim. Perkins was awesome on the defensive the end, constantly getting steals and deflections playing the passing lanes.  Overall, he had an excellent weekend.

2021 6’4″ F Parker Day (Saginaw, WI) – One of the best fundamental players in the camp.  Not only did he show that he can get pass players and score the ball when attacking the basket, he’s also was able to impact games in other ways.  Using his size at 6’4″, he gets in paint and enjoys to play physical when needed.