Part 1 of Day 2 of the Orlando Hoops Festival, 2 Standout Guards!

Orlando, Fl – Day 2 of the Orlando Hoops Festival giving by Source Hoops was epic.  Competitive games, high scoring players and challenging moments to the end.  The energy exploding from the First Academy gymnasium on Saturday was unreal.

Don’t take your eyes off Nelson… 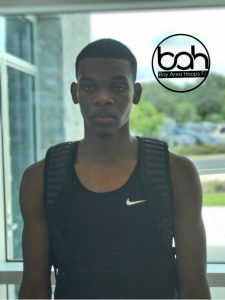 The New York Lightning Anthony Nelson was one of the players that we came away impressed with. The 6’4″ 2018 NYC guard of South Kent is as smooth as it gets!  His crafty moves to drive past defenders and an ability to go left or right, he showed that this lefty has game! What struck us the most was his ability to step up his game when needed.  Nelson put on display his pull-up mid range jump shot and allusiveness at the basket.  All aspects of his game at the guard position was pretty much on point,  he takes bumps and reacts to offensive read plays off the dribble.  When asked about his game and experience at the event he said “I feel like I can improve on my decision making especially when playing against good teams like the ones at that tournament.”  Nelson is picking up steam in his recruitment. “My recruitment is going well, at this moment I don’t have a top runner for schools right now.”  With such schools like UMass, VCU , St. John’s and many others, we look for more to put their name in the running. 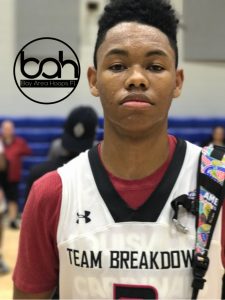 With a very unique game that exploded for 45 against the NY Lightning,  the 2018 SG Anfernee Simons of Team Breakdown just couldn’t miss.  Simons is a legitimate scorer with a special gift to forget the last shot, he has a shooters mentality.  Once he has his game going from the outside its almost hard to slow him down.  Simons has an unexpected bounce so be very careful when trying to contend him in the lane.  The Louisville commit will be ready for the test in the notorious ACC after a prep year at IMG.  Simons has had an unbelievable summer from performing at the Pangos Camp in CA to the NBPA in VA, he is definitely stepping up.  Simons said “The Source Event was a good event I played pretty good but I need to improve on my different finishes to the basket.”  He will be continuing his trail of astonishing work in Vegas this week.