Charlottesville, VA – NBPA Chief of Player Programs Purvis Short has been a part of the NBPA plan since 1993 to bring forth a solution to implement development opportunities top basketball players.  NBPA came up with the “Top 100 CAMP” which also helps future NBA referees and sports broadcasters.  There motto ” This is where it all begins” fits well.  Houston Rockets player development Coach John Lucas is a person with a story to tell and he’s what I call “A full circle person”.  He gives enhancements on life lessons through the sport of basketball.   He provides NBA Top 100 selection committee with scouting information from his various National Scouts.

With a heavily loaded camp, here some 2019’s that stood out.

Cassius Stanley gives you a mixture of athleticism and solid decision making.  Stanley can be explosive at any giving moment but still play with a equal mix of patience.  He was one of the few two end players displayed at the NBPA Top 100 Camp.  You can never question his abilities and his will to compete. Stanley is too valuable not to be one of the best at the NBPA Top 100.

After our third viewing of Cole Anthony we are convinced he is the best PG in any class. His game is well defined at an early stage.  Anthony can explode and make impacted filled plays but will also put players in scoring  situations to be productive. Anthony is quick in his lateral movements and agile enough to get through small windows of opportunities. You just have to love this kids game!

Scottie Lewis was spectacular! His drive to compete is extremely high as he showed in the championship game.  Lewis is a dangerous finisher in the open court or driving to the basket in traffic.  His edge and demeanor are two opposites but they match his personality.  He plays at such a high level and demands the attention but will show his abilities to be a true teammate at all cost. 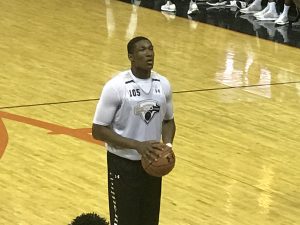 What were they saying? His weight is down, he moved better in the paint and body looks the part of a HM player and the end people were correct!  David McCormack was an enjoy to watch because of his use of footwork and size to dominate defenders.  Very impressive from the jump but he still as room for more improvement and growth.  Look for more perimeter activity plus increased action off screen and role situations.