Tampa,FL – Raised in LeFrak City, Archbishop Malloy high school alum and Queens native; Kenny Anderson was the best high school phenom prospect in the nation……….. PERIOD!!!  He had a standout career at Georgia Tech University.  He was a NBA all-star in 1994 and played in the NBA for 14 years.

Now that he is no longer playing; he is sharing his knowledge at the Kenny Anderson National Basketball Camp held at The Sports Performance Clinic in Tampa, FL.  We watched and listen to him share his on court and off court experiences.  There were also guest appearances by  motivational speaker Vincent Harris and former Tampa Bay Buccaneer Anthony Davis. 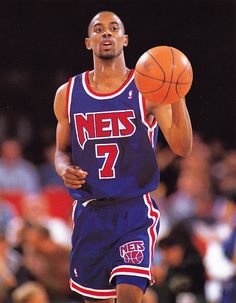 The camp focused on fundamentals such as: dribbling, shooting, passing, offensive and defensive principles. Kenny Anderson also shared tips, tricks and tools for undersized players  to help improve their game.  Throughout the camp Clinic Director Bobby Parker emphasized the importance of training and development.  Anderson shared stories about his time as a college player at Georgia Tech and as an NBA player while playing against some of the NBA greats.

At times we sit down and take a second to think at some point it gets bigger than “just” basketball.  Anderson talked about being open minded not being afraid to talk about personal experiences in life, being able to fight through life expectation and taking ownership of your actions.  He talked about being committed  and shared some of the sacrifices he made  like spending time with friends and family while working on his skills.  Anderson stated, “It’s not overnight you have to spend hours in the gym you have to shoot jump shots like for instance Stephen Curry,  to establish muscle memory. It’s all commitment, you have to work on your game if you don’t work on your game it’s not gonna happen“.

We caught up with camp participant 6’3” shooting guard BJ Harris c/o 2020 and he shared his thoughts on his camp experience.  He said. “He learned lessons on court awareness and his favorite was expanding his basketball IQ“.

At the end of the 1st session it confirmed Anderson truly cares about young athletes learning and improving their game.  The camp reinforces his long love and dedication to the sport of basketball.  I’m looking forward to session 2 which will be held: July 10-July 12 at the Sports Performance Clinic.  Contact 1-866-500-3493 for more information.