Dallas, TX – The Gamecocks was victorious this past weekend over the Mississippi State Bulldogs 67-55 in the NCAA Women’s Tournament Championship game.  South Carolina made its second Final Four appearance under head coach Dawn Staley and coming into this contest, we knew what she was coming for.  Looking to solidify there names in the history books, the gamecock were confident and showed a game plan to make this championship a reality.

As the game started you noticed the effort from the Gamecocks.   Countless times SC got the ball in the paint and avoid taking three point shots.  The Gamecocks controlled the boards and just completely got what they wanted.  Mississippi St. made some efforts in the start of the third qtr. by adding full court pressure to get mental mistakes from the Gamecocks but it didn’t last long once foul trouble hit the Bulldogs.  Mississippi State’s Morgan Williams had limited play in the second half due to the lack of energy as stated by Coach Vic Schaefer “ I thought we had a couple kids today that just didn’t quit have the energy level that we needed.  When you combine that with their level seemed to be really good. I think that made for a bad recipe for us not being able to handle dribble penetration.”  Victoria Vivians added 12 points with 4 rebounds and Dominique Dillingham with 11 points.

The Gamecocks took care of business in the paint with a 42 to 20 advantage.  Plus controlled the glass 40-27.  Even though Mississippi State beat UConn in an historic fashion, I think they just ran out of gas.  Not to say they were  over matched with SC but we questioned if they were just satisfied just beating UConn. 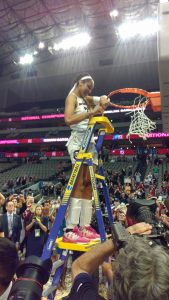 Most Outstanding Player A’ja Wilson cuts down the net

South Carolina’s A’ja Wilson played big on a stage were the greats shine. Wilson controlled Mississippi State from the start, with 23 points, 10 rebounds and four blocks.   She was named the Most Outstanding Player of the Final Four, and outside the locker room she was asked how was this feeling. “I remember tweeting that I wanted to be like LeBron and bring one home, and now I know the feeling of it.  When asked about doing it for the State of South Carolina she stated “The state has done so much for me and now I can return it with a national championship. I can’t even put into words what it’s like when you have done something for your state.  I am honored to wear these words (South Carolina) across my chest.”

The Gamecocks also got big help from Allishia Gray with 18 points and 10 rebounds.  Coach Stayley stated outside the locker room how she felt after winning the championship “I can check off one of the things that has been a void in my career,” Staley said. “National championship games and Olympics. Those were the things that I held dear and near to me when I was growing up, because those are the things that I wanted. That’s what I was shooting for. When I couldn’t get it done in college, I thought that was it. I never wanted to be a coach. I never wanted to be sitting where I’m sitting. The late Dave O’Brien, the athletic director at Temple University, saw something in me that I didn’t see in myself. He asked me to come and be a part of changing the program at Temple. From then on I really can’t see myself doing anything other than what I’m doing, impacting the lives of young people. To be able to check this box off in my career, I’m really grateful and thankful that he made this possible.”

When asked by Bay Area Hoops, Coach Staley also mentioned to us about her game plans and adjustments stating in the video below

Congrats to the South Carolina Gamecocks!