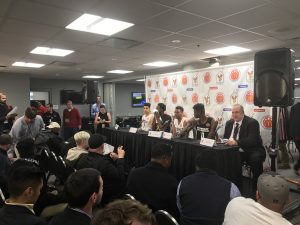 Chicago, IL – The 40th McDonald’s All-American Game on Wednesday March 29th 2017 displayed some of the most energetic, athletic and promising players coming out of the high school ranks.  All the players were phenomenal! With playing time being a factor, players couldn’t shine like they wanted too.  Head Coach for the East was Jim Martin of Providence School (Jacksonville, FL) and the Head Coach for the West was Gary DeCesare of St. Rita of Cascia HS(Chicago, IL)

At the end of the day West defeated the East 109-107 with the 2017 McDAAG MVP going to  Michael Porter Jr. who finished with 17 pts and 8 rebs.  Porter went  6-13 for the field with only 1 turnover.  Porter is a player that will utilize his length to be effective plus put pressure on opposing defenders from the perimeter.  The Missouri commit has the talent and skill to do some special things at the college level.  The most energetic player without a doubt was the Alabama commit Collin Sexton.  Sexton lives for the lime light and steps his game up accordingly.  His crafty movements and willingness to make the extra pass was impressive but his explosiveness at the rim is unquestioned.  The Georgia native will look to continue his dominance and competitive nature at the next level.

6’11” C Mohamed Bamba was a definite standout dropping 17 pts with 5 rebs and 4 blks.  He makes his presence known protecting the weak side defensively.  We found out that he is just not a rim protector but a efficient scorer around the basket. Listening to his post game comments and interviews, Bamba is poised to be in front of camera’s, a very distinctive player on many aspects.  Undecided 6’6″ SF prospect Kevin Knox II out of Tampa, FL has always been an intriguing.  Contributing 15 pts and 3 rebs, Knox has the capabilities to stretch the floor and effect a game in so many ways.  He maybe one of the few players that’s able to continue to add more to his game.  Just knowing when he is aggressive he can be scary, especially when he uses his length and size.  Look for Knox to make a splash at his next destination which has slimmed down to Kentucky, UNC, Duke, Florida State and were also hearing Missouri.   The 7’0″ C DeAndre Ayton who is committed to Arizona was a silent killer last night.   Ayton gave 8 pts, 11 rebs and 3 stls.  Ayton is busy working at all times in the paint and as no problem getting up the floor to get his baskets.  Lets not forget the Duke commit Wendell Carter.  The PF finished with 15 pts and  showed why the Blue Devils are so interested in him.  He size can put a hurting on defenders.

Players who stood out: