Most Surprising Players of the day: 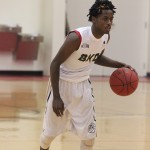 2015 PG Domani Davis of Hillsborough HS 5’10”/150:  Started off a bit erratic but calmed down and and made plays.  He came to the showcase, patiently waited and made an effort to impress.  One of the fastest PG’s at the showcase and undoubtedly the most creative.  Uses both hands well with an occasional tricky pass to throw off defenders.  Davis wasn’t shy when it came to shooting the long range shot.  He puts pressure on defenses in transition and was a problematic to contain. Davis just needs to work on controlling offenses and being patient.

2016 SG Neilon Joslyn of East Lake HS 6’3”/160:  The most surprising kid at the showcase.  Like he just came out of nowhere. Joslyn seems to know what he’s doing.  He made a buzz around the gym with his performance.  Joslyn is long, slinky and creative off the dribble well. Once Joslyn puts on more muscle mass please watch out!  PLAYER WATCH! 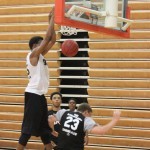 2015 SF Charles Isaac of Blake HS 6’3”/195:  Just a BEAST!  Strong, big hands and long arms.  Isaac is showing up and showing out.  A play maker with a instinct for the basket.  Plays both ends, moves well without the ball and makes a team better.  Doesn’t mind getting dirty!

2015 SG Danial Morales of Newsome HS 6’2”/180: When he’s hot ….he’s HOT!  Morales has a knack to score.  He uses the lost art of mid-range shooting.  Pretty strong for a SG and uses he’s spins and head fakes to maneuver around defenders.  Good Player.

2015 PG/SG Isaiah Channer of Strawberry Crest 6’1”/165:  Started of slow, picked it up in the second half of game play.  Channer is a special kid once he figures it out.  Naturally talented, competitive, and can score.  He needs to stay vocal and put continuous pressure on defenders with his athleticism.  He is truly a scary performer when he is on his game.

2015 PG/SG Stefan Kitchen of Grace Christian 6’3”/173:  Smooth, long and persistent.  A great player to watch and be around.  He brings the best out of others.  Kitchen can score from multiple spots on the floor but sometimes his shot selection can be questioned.  He needs to stay aggressive at all times.  Kitchen is capable of playing the 1 or 2 because of his length.  He will make some college program much better.

2015 SF Payton Wilson of Tampa Bay Tech 6’6”/185:  Mr. Underrated!  He’s going to be a monster once he gets a year of a college program under his belt.  A volume shooter and with a giving chance, Wilson can change the complexity of a game.  He can kill you from deep and drive pass you for finishes at the rim.  Wilson should work on creating space between his defenders to get his shot of easier and work on his vision as a passer when needed out of double teams.

2016 SG Johnny Lampkin of Brooks Debartolo 6’2”/180:  Johnny was the hardest working player of the day.  Plays both ends of the court with passion.  Shoots the three ball well and was not afraid to let you know about it.  Next year will be his year!

2017 SG Tyler White of Durant HS 6’1”/175:  A lefty plus a flashy ball handler who can quickly warm up from the outside.  At times White can forget he’s playing with others because not too many defenders can stay in front off him.   He will grow as a player in the years to come.

2016 PG Erick Hernandez of Durant HS 5’9”/140:  FAST, FAST and more FAST!  Hernandez can use his dribbling ability and speed control to advance past opponents.  Gets out of full court traps easily and keeps the ball low.  With some work on his jump shot and he can be much more of a threat.  .

2016 PG Reinard Burke of Strawberry Crest HS 6’0”/ 184:  Getting better at each Breakdown showing. As Burke slims down he as been showing more passion for the game.  Burke is aggressive, competitive and can see the floor well and makes himself known vocally.  Displays a good IQ.  Burke should work hard this off season on hitting the outside shot consistently and stay working with his conditioning.