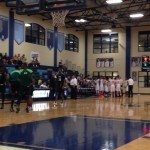 Day 1 of the ARS/Rescue Rooter National Hoop Fest started with Arlington Country Day (Jacksonville, Fla.) vs. Tampa Prep (Fla.).  Tampa Prep dominated from the jump ball.  Juwan Durham of Tampa Prep made is presence relevant with a 19 pts first half performance, while ACD struggled in the first half to figure out defensive schemes.  Prep created easy shots for Durham.  During the second half, ACD made an effort to slow down Prep with full court pressure.   Tulio Da Silva and Mario Kegler started to warm up.  Tulio Da Silva contributed 17 pts with 13 pts coming in the 2nd half.  Even with some late efforts from ACD to close the scoring gap, it just wasnt enough to beat Prep.  Tampa Prep defeated Arlington Counrty Day 65-60.  Durham finished with 25 pts and 12 rebs.  ACD Mario Kegler finished with 22 pts.  Tamp Preps Michael Fridella added 15 pts. 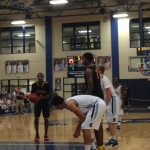 The second game between Berkeley Prep (Tampa, Fla.) and Lakewood (St. Petersburg, Fla.) showcased Lakewood’s Anthony Lawrence and Berkeley Prep’s Jacobi Mathis.  A slow but competitive game that could have went either way.  Jacob Mathis who ended up with 19 points missed two crucial free throws with about 1:18 left in the game that would have tied them with Lakewood.  With the score 41-39 the Spartans separated themselves to put the game away 47-40.  Lakewood’s Anthony lawerence finished the contest with 17 points.

Saturday’s game will consist of: