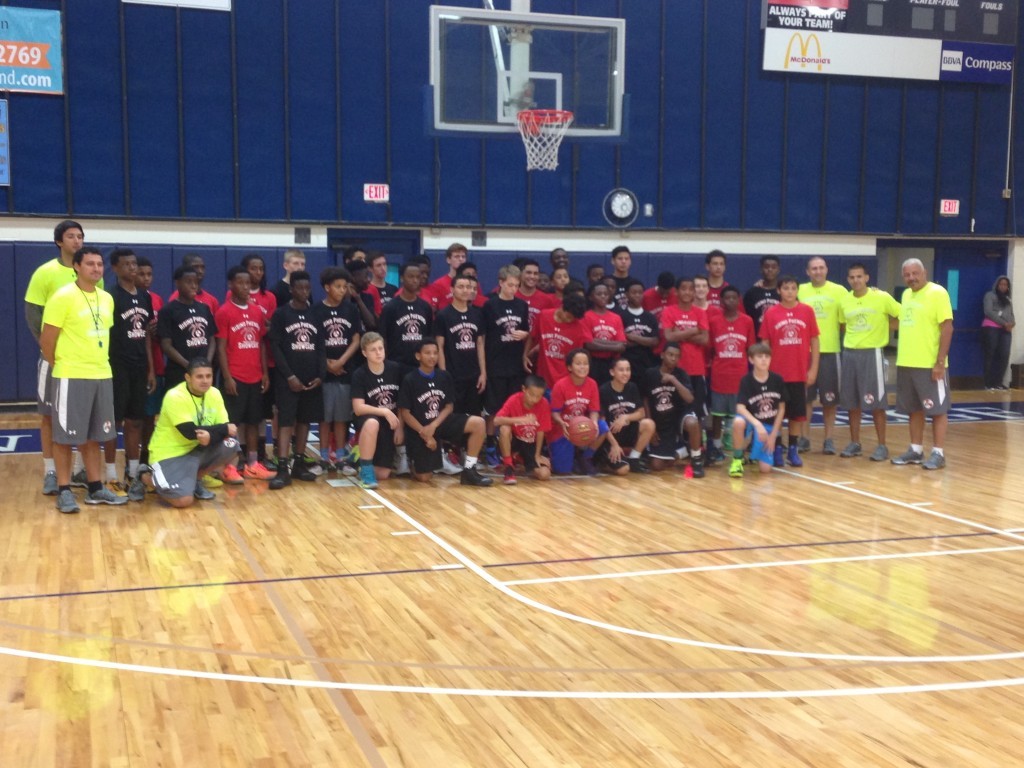 IBT/Under Armour presented its first Rising Phenoms Middle School Showcase, which was held at Santa Fe College in Gainsville, FL.  This was the first of many events put on by International Basketball Training.  We were really excited to witness talent ranging from 6th to 8th grades coming from all areas of the state.

Coach Carlos Morales and Coach Carlos Villalobos coordinated the event.   I had a chance to speak with Coach Morales about his thoughts on the showcase and he said “From the feedback we have gotten from parents and kids in the past 4 hours I believe the event went great! We received a lot of text messages from players and parents and it really means a lot to know that their kids actually learned some new things about basketball and got their money’s worth. People think events like this are easy to put together but it was a lot of work so we are really happy with the final outcome. We will try to keep bringing events like this one here to Florida including girls events as well and we are also going to have some international camps that FL kids won’t want to miss out.”

These two Coaches are trying to introduce a middle school showcase atmosphere to Florida.  Coach Villalobos is an assistant at Santa Fe College he also said “I was really happy with the turnout, I thought the kids really worked hard during stations and during game play I felt like they competed. Also, their effort was good and they tried to play unselfish basketball. The two teams that played in the championship game really bought in sharing the basketball and playing the right way.  Hopefully everyone walked away with different nuggets to help them improve their game. The purpose for IBT was to promote team play, effort and intensity during games. During station work we wanted to make sure that each athlete was given proper instruction. We definitely feel that our objective was accomplished for the day. This was our first event so we have some kinks to improve on but it was a success in our eyes and hopefully the parents and athletes feel the same way !

With just over 50 athletes competing at a high level it was hard at first to determine the best player at the event but as the showcase progressed 2019 6’2” PF Titus Baggs of Discovery MS started to show his dominance.

Baggs was a natural at his position and it also is hard to ignore his athleticism and patience.  When asked Baggs said he patterns his fundamental game after one of the greatest Power Forwards to play; Tim Duncan of the San Antonio Spurs.  Baggs displayed his footwork, aggressiveness around the basket, ability to score in a set offense and a passion for the game.  After starting slow in drills sets, he picked up the pace as he easily averaged 12-14 pts and around 6 rebs per game.   He shot excellent from the top of the key and a nice shooting touch as well.

From the start of games 2019 5’10” SG Bryan Greenlee of the Rock was the most aggressive by far. He is a competitor he will compete, but at times he forgets the team.  That can happens when you’re a scorer and a hard check for defenders.

However,  Greenlee is a gamer!  Finishing at the rim on many occasions, able to create off the dribble and definitely a match-up problem for opposing defenders.  The next guy who was one of the few who displayed good drills sets and showed his abilities to play the PG position was 2019 5’5” PG Jordan Smith of Andrew Jackson MS.

Smith was creative with his ball handling.  Was able to get separation off his dribble, penetrating the paint drawing defenders and making defenders afraid to push up.  Would like to see more of the pull-up jump shot and more patience in the offense.  Smith will be a good PG because of his advanced IQ and ball control.  Growth will be key but a name to remember.  Another eye catching player was 2019 6’2” SG Trent Whittemore of Cornerstone.

His frame is athletic.  The 13 year old displayed abilities to finish in the open floor.  Whittemore’s jump shot was fluent and consistent.  He did a good job running the floor, grabbing rebounds, finding an open teammate, and finishing around the rim.   2019 Adrien Velazquez 6’5” SF of Downey Christian who may have been the most versatile player.

He showed his length around the basket and he finished over defenders.   Excellent quickness off his first step to the basket but occasionally a bit erratic.  He goes strong to the basket and tough on the boards.  With his size, Velazquez can be useful in multiple positions.  Starting from the first game 2019 6’0” SG Norris Taylor of Hill Gusta was shooting the lights out from beyond the arc.  Taylor made a statement with a 18 pt performance(4 of 6 from 3 pt range).

A true athlete with a passion for competition.  He’s a shooter with abilities to extend the defense.  He attacked the basket and played unselfish ball. Taylor isn’t afraid to pull up and knock down the outside shot.  Not a real flashy ball handler but can get to the basket with his size.  2020 5’6” PG Jeremiah James was one the most surprising players.

James is fearless,  a good rebounder, who played both ends of the court and defended the ball well.  He was a stat filler, his creativity with the ball made him intriguing because he did so much.  Another all purpose athlete was 2019 5’7” PG Romaire Burke of Mulrennan MS.  Here’s a guy that was a true team player who never complained.   Burke has a lot of potential and demonstrated that with a 17 pt performance in game play.

His upside will flourish once he keeps a dominant attitude and work more on his long ball.  13 yr old Burke is crafty with the ball, uses both hands, displays a high IQ and penetrates off the dribble. We also liked that he uses his pull up jumper.  2019 6’0” SG D’Marcus Purcell of Shoal River MS was solid.  Strong and aggressive.

shows an instinct to play passing lanes and stayed active at all times.  Purcell has a quick release and finishes with either hand around the rim.  2019 6’1” SG Zavien Morales is a very gifted player with gifted attributes.

A solid lefty ball handler, very competitive and had no problems creating his own shot.  Morales should work on finishing moves when attacking and show more of his pull up shot.  He was definitely a top player at the event.  2019 5’6” PG Richard Maldonado was silent in drills but woke up for game play.  A TRUE PG!

He runs the offense, moves without the ball, has good vision and is a good ball defender.  He knows how to decipher when to make those around him better and when to go with his game.  Once Maldonado works more on his shooting he will be much more effective at his position. 6’0” 2019 SG Emmanuel Adedoyin of Faith Christian he was aggressive when he attacked the basket. Not too many guys with that type of athleticism.

Adedoyin also has a soft touch with his mid-range and he uses his length to be a very effective rebounder.  Needs to work on consistently knocking down the jumper and be more demanding in the offense. 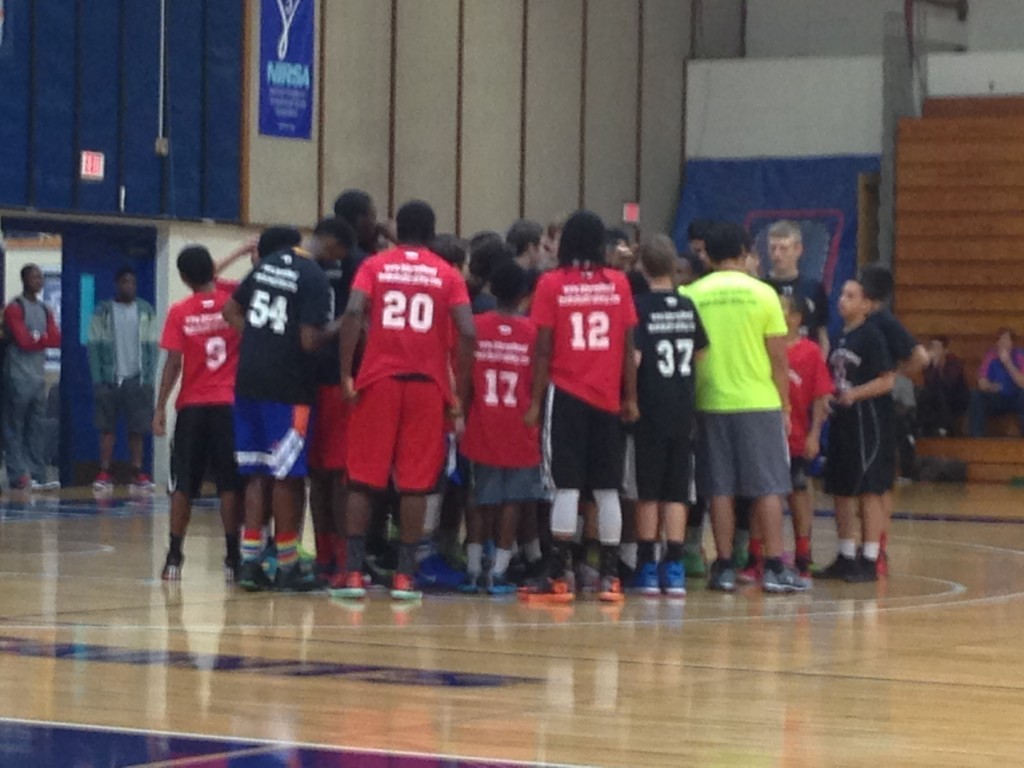