Nike Team Florida’s “The Workout”at Riverview High School in Sarasota was a tremendously well organized event.  Day 2 displayed some of the most talented up coming players from surrounding areas.  Don Showalter, USA basketball National U16-U17 team coach was the guest speaker and he provided the players with valuable information. 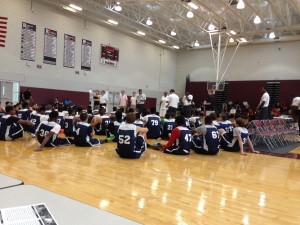 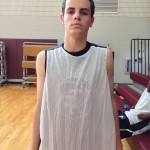 A.J. Caldwell 6’4 sophomore Sarasota Riverview: “Mr. LIGHTS OUT”  he was almost automatic from beyond the arc.  Caldwell seems to have a good feel for the game.  He’s definitely a zone buster,  he’s not limited to set shots; he moved well without the ball.  He’s a player that will fit great into a systematic offense.  I didn’t see much of the dribble drive to the basket from Caldwell but he made a few screen and flash plays for short jumpers.  He’s an average ball handler I’d like to see him work on his lateral movement on defense.  He’s not a high riser but  he uses both hands well to finish.  Caldwell will make an impact in any back court. 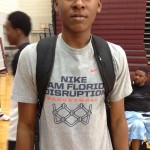 Darius Banks 6’5 sophomore St. Petersburg HS:  Stayed aggressive “Early and often”.  He displayed good shot selections and he looked pretty good coming off of a back injury.  On many occasions Banks was able to take contact and finish, there were some and-ones and a he made a few awkward shots from bumps and pushes.  Banks looked comfortable on the block and confident in shooting the mid range.  He has a solid frame for the PF position and he was consistent on the boards for the most part. I’d like to see him work on creating transition offense off the rebound, be more demanding in the post, use his size for the pick and roll and if he works on his dribbling he can be a more versatile at the PF spot.  There is lots of upside for this young man. 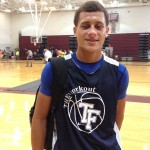 Jacob Tracey 6’4”  freshman PG Mariner HS:  Calm, Cool and Controlled! Tracey stayed within the game and put others in predicaments to succeed.  He plays in two stages:  he plays within the offense or he can take it to another level if provoked.  His frame is solid for a PG and he can give smaller defenders problems in the post and he was able to do that with ease Sunday.  Jacob Tracey is a true floor general.   His dribble penetration skills were OK but Tracey can work on improving his skills to separate himself from defenders.  He’s a player with lots of potential. 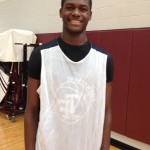 Simeon Kirkland 6’7 sophomore Trinity Catholic:  Size with lots of strength and power.   Stayed moving on offense and active on help side defense.  He was efficient on the block and was always ready showing his hands to receive passes from penetrating players in the lane, that effort got him easy layups or dunks.  He didn’t turn the ball over much,  he runs the floor and he’s able to shoot well from close range.  Kirkland is still growing and will exceed expectations because of his structure physically and discipline.

Sean Mobley 6’9 sophomore Florida Air Academy:  I started to watch him more later in the day and he stayed consistent.  He showed a soft touch at the rim and he was pretty strong against opposing big man.   A decent spot up shooter from mid range and average ball handler for a big.  I was impressed with his IQ, he had patience to draw double teams and he was active on the offensive glass.  Mobley hit a couple of three pointers and didn’t force many shots.  I’d like to see him work on footwork and post presence. 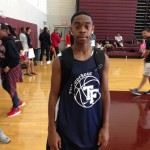 Damon Harge Jr.  5’8”  Freshman Orlando Christian Prep:  This may have been the best I’ve seen him play the PG position.  He didn’t over dribble but he was able to extend the play for others to get in a position to score.  Stayed competitive and matched up many times full court on defense.  He is coming along with his game control.  Good work! 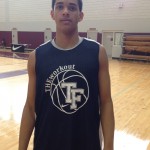 Marcus Cohen 6’2” Sophomore PG Sickles HS:   An under-rated player at times but a very outspoken player when playing to his strengths.  Capable of being a dynamic true PG because of his scoring attitude and unselfishness to make passes.  Cohen needs to recognize his player personnel at times on the floor and stay focused on being confident in his abilities.  He has lots of upside in his growth and should be a hard to handle in the future.

Antwain Jones  6’4”  Freshmen  PG Sickles HS:  This guys has so much potential!  Talented with the ball and he has good size.  He used his body well against smaller defenders.  He displayed good body control and switched hands on shots in the paint after the contact on many occasions.  Jones worked well off the ball on Sunday and I didn’t see many forced or terrible shots.  Jones has room to develop, I’d like to see him be more vocal and make the extra pass.

Daniel Madding 6’9 Sophomore F The Rock School:  GAME CHANGER!  Energetic at all times.  A get in your face type of player.  Ran like a deer in transition.  Finished at the rim with vicious dunks.  I’d like to see Madding get stronger in post play.  He’s definitely a gamer.