The level of competition was balanced and ranged from 9th-12th grade student-athletes and two 8th graders.  The AAU clubs in attendence have a history of producing college prospects. 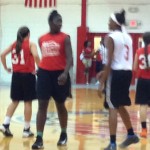 Stephanie Paul 2016 PF 6’0″ Community School of Naples:  May have been the BEST player in attendance.  Paul made an impact in all games she played.  She’s a superb athlete with lots of energy.  She was able to get up and down the floor, showed good foot work and dribbled in transition well for her size.  She had a dominating post presence as well as a soft touch with her jump shot.

Tracey Kemp 2016 CG 5’6″ Boca Raton Community HS:  Very solid and was able to drive the ball in the paint.  Handle ball pressure well and finished through contact.  Kemp’s strength is her most impressive asset..

Peyton Walker 2015 F/W 5’10” Seffner Christian Academy:  Scores the ball inside and out.  Peyton is a team player that demonstrates leadership qualities.  Walker lives for contact, diving for loose balls and creating problems in the painted area with dribble penitration.

Jahmila McIntyre 2015 C 6’0″ Apopka HS:  Active on the boards.  Mcintyre played within her game and made things simple.  Was very comfortable in the post.  Moved around without the ball.

Chelsea Johnson 2015 SG 5’7″ Colonial HS:   Wasn’t afraid to get other people involved in this type of setting.  A very calm player with burst of emotion and speed.  Her first step was very impressive.  Johnson also showed on the ball defense.