Mississippi State must take full advantage of their experience in this match-up.  Last year’s test against South Carolina in the championship game in which they fell short; should be a eye opener for this up coming game.  Mississippi State’s 6’7″ Center Teaira McCowan is arguably the most dominant center playing.  McCowan can be a nightmare when matched up in the post.  Rebounding will be key for MS has McCowan should be able to dominate the glass, who averages just below 17 RPG.  Teammate Victoria Vivian will have to continue to control tempo and stay aggressive scoring the ball, she averages over 19 PPG.  MS through the season has taken good care of the ball and their ability to score will be a major factor.  This is what Coach Vic Schaefer stated “This year’s been unfinished business. I think this team has tried to embrace that and done a great job with that. We have not run from the target on our back all year. We’ve talked about, hey, you’re going to get everybody’s best shot. For what you did last year, you’re going to get everybody’s best game plan. Everybody’s going to be excited to play you. We had a really good nonconference schedule.  But then as the year went on, that target got joined by another target, which was the undefeated target, to go 32-0, and they’ve handled that like a champ. So really difficult to handle both of those things, and for these kids to do what they’ve done is quite remarkable.  We didn’t run from wanting to win a Southeastern Conference Championship. We put a picture of their trophy, big picture, laminated it, put it on their lockers. I wanted them to see that every day. We won the Southeastern Conference. I mean, that’s so hard to do.
So this team has embraced challenges, starting with.” 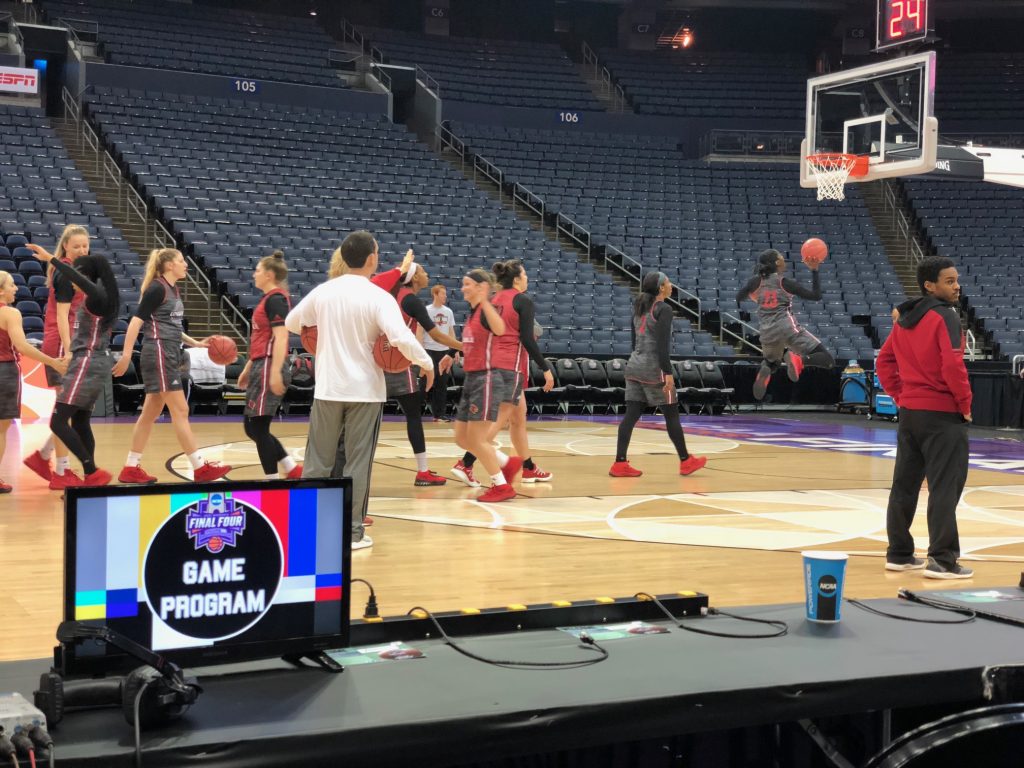 Louisville Cardinal’s will take their third trip to the Final Four and must concentrate on getting 5’10” G Asia Durr up and running.  Her quickness will be needed to be competitive. Her abilities, energy and heart of a champion attitude will have to be displayed early. The 1st team All American, Durr has taken the Cardinals to this point and her team looked ready has I watched them practice Thursday morning.  Discipline will be key and avoiding attempting unauthorized three pointers early will be relevant.  Keep an eye on Senior Forward Myisha Hines-Allen (3rd team All-American) and Arica Carter.  Coach JEFF WALZ stated when asked about defending Mississippi State “Teaira is probably stronger as a low post player. Marie, I love the finesse of her game. She could post up at times. She had a nice little step back. So their skill set was a little bit different. We’re going to have to do everything we can, it’s no secret, to try to get Teaira as far away from the basket as we can, make her score over us, but then you’ve got to turn and box her out.  What she does so well is she might miss it, but then everybody else takes a step to the basket. Well, she takes a step with you, and she just rebounds the ball over you. It’s not a foul. She’s just taller and stronger, and she rebounds it and puts it back up and in. We’ve got to limit the number of offensive rebounds and second-chance points that she’s able to get.”

UConn had its win streak broken last year courtesy of the Mississippi State Bulldogs but they are here again.  Coming off a 29 point blowout victory over last year champions South Carolina in the Elite Eight, they now have a tag of being the best team in Women’s College Basketball again. With that being said, I expect UConn to be the favorites this year.  Bringing back most of its team from a year ago, The Huskies offensive is incredible and has the best efficiency in the NCAA.  Gabby Williams and Katie Lou Samuelson are focal points and seem to be focused on becoming champs again.  Will they get there 12th Title?  Running through opponents by an average just under 40 points per contest in the tournament.  Samuelson will have to be efficient in her offensive game and with a great two way player in Williams, the Huskies seem ready. Coach Geno Auriemma mentioned “By the time you get to this point, there really isn’t a whole lot that anybody can say that hasn’t already been said by every coach, every player that’s here. It’s all redundant.  Everybody’s happy to be here. Everybody’s excited to play. Everybody respects the other teams. Every game’s going to be difficult. Lots of great players in the tournament. So all that is absolutely true.  We deserve to be here, just like the other three teams do. We’ve earned the right to be here, and we’re going to play a great team tomorrow night. If we play better than they do, we’re going to win, and if they play better than we do, they’re going to win. It’s no more complicated than that.  We’re going to go to practice after this, and we’re going to prepare and get ready and come out and play.” 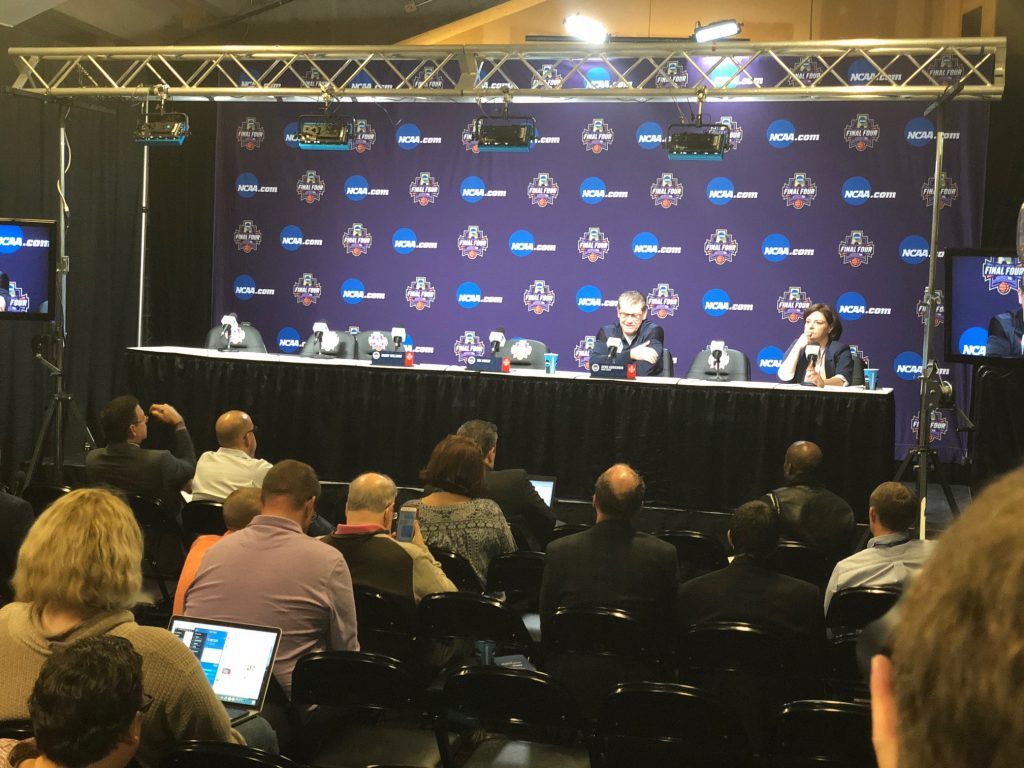 Notre Dame is back in the Final Four for the 6th time in the past 8 seasons. Led by Junior Arike Ogunbowale, a 1st team All-American who is averaging just over 20 points PPG.  Do the Fighting Irish have a shot to defeat UConn?  After losing four players to ACL tears this season,  Ogunbowale has been leading the way for Notre Dame so far.  Notre Dame’s will have to find a few components from its thin bench or be forced to depend even more on their starting unit. Coach Muffet McGraw stated “Well, there’s not many decisions to make who’s going to go in the game, where you look down and go, I’ve got to get her out and get somebody else in. In some ways it’s easier, but it’s generally harder. I think practice is harder. Foul trouble is harder. You worry so much with the anxiety of what else is going to go wrong. As soon as someone gets their first foul, I start to worry. How is this going to play out? Can we play zone?  So I think some of the things we’re trying to look at is how we manage practice, how we manage the game, how much zone can we play, do we need to change our strategy to avoid fouling? I think there’s a lot more strategy involved when you only have a small bench.”