Tyrese Williams is making an IMPACT! 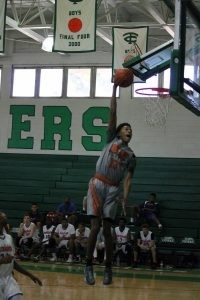 Bay Area Hoops has been monitoring 2018 standout Tyrese Williams for 3 yrs now.  First getting notice of him at the Breakdown Showcase, we stated he would be a player to watch.  Once he started to play more on the travel circuit with The Skill Center Elite organization, his growth is very visible.  Williams found instant impact as soon has he transferred to Tampa Bay Tech under the guidance of Coach Adrian Johnson.  When asked how he felt about his new team and season he responded with “The season is going great for us, we’re working hard everyday in practice to get each other involved and better as a whole.  The impact that I’m bringing is my energy and ability to score.  I’m not comfortable playing my position at the 5 and 4 but bet I’m improving pushing the ball and shooting just incase I’m the player who has to do.”

Williams has worked extremely hard and is starting to learn how to maximize his length and understand the feel of the game. Williams is long enough to block or alter shots on weak side help and versatile enough to play multiple positions.  It would be insane not to see him playing at the next level.  He’s a high return player that will constantly make plays.  “I’ve talked to multiple colleges such has UNF who are showing interest but I honestly can’t wait until someone decides to offer me.”

In regards to his past travel ball summer, SCE Coach John Arroyo mentioned “He played well, being in the top three in points scored as well as one the top rebounders in every game. Tyrese is an energy player, runs the floor like a deer and is very active on both ends of the floor.  He has been with SCE since the 8th grade and has always wanted to make an impact on any team he played on. Every year he’s game has improved, Tyrese is very coachable and is always liked by his peers, he is a high character individual with great qualities such as dependable, trust worthy, loyal, hard working with great integrity! He is looked at as a leader.”  Look for Williams to be at other events soon!

Tampa Bay Tech is 11-1 overall and controlling their district at 8-0.  Check him out below.