The annual Nike Premier Exposure Camp held in Orlando this past weekend was once again loaded with top talent.  This event was straight to the point no playing around with the players just basketball.  One of the most impressive players who represented the 2019 class was 6’8″ sophomore Zimife Nwokeji of Maclay. 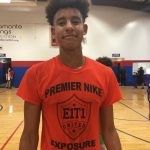 This was our first viewing of Nwokeji and he made sure he was the most talked about player in the gym.  Didn’t notice him oversell his talents nor force issues on the court.  He has a well groomed skill set for his length, runs rim to rim and he has a nice perimeter touch.  I was really impressed with his ability to recognize mismatches.  I can’t wait to see him again.

There’s not enough to say about 6’2″2018 Ronaldo Segu of Orlando Christian Prep but the best way to describe him is “Loaded with Heart”. 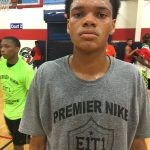 When watching him I made sure to have a good view of the clinic he was giving offensively.  He blew by defenders as well as finishing at the rim with a rim rocking slam over a defender.  Segu is a special player for his size, he plays with an energy level that’s off the charts and competes at a high level.  Segu moves well in crowded areas with a dribble that’s low and effective. His use of both hands to attack defenders and create contact was eye catching. The young man has improved and will continue to add on to his game. As he improves his outside shooting and on ball defense we will see more dominance from Segu.

Up and coming 6’7″ 2019 F CJ Walker as always been an intriguing player to me. His abilities to post and face up defenders is a dominant factor of his game. 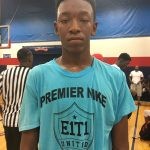 Walker has added to his game this past year, where he know can create off a triple threat position to give himself multiple ways to score.  He growing and picking up good habits offensively.  He’s worked on his form and his shot is improving, he has become more active defensively especially on weak side help.  Look for Walker to becoming a long effective 3 when he finish developing.   This kid as a ton of upside!

Lets not forget 6’4″ 2018 Michael Devoe of Oak Ridge.  Started a bit slow but picked up his game and was fantastic. 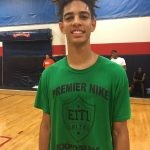 Devoe created offense from rebounding and defensive play.  He got out in transition and with his frame he was able to use his length to shoot over players or slide past going right.  He had tons of solid IQ plays throughout the day.  He should have a great upcoming season with Oak Ridge.

2018 6’8″ Big Fella Rifen Miguel of Oak Ridge got up and down the court and made himself known in the post. 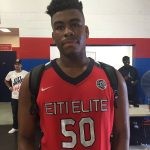 He can drain defenders with his size and none stop pounding that usually generates in points.  Miguel plays within is game but will occasionally get caught in moments but overall he will be a factor this year.  With more conditioning and consistently hitting the 10-15 foot shot he will be something to recon with. 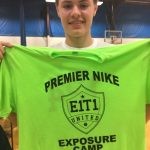 Anderson’s a player who knows his spots on the floor and uses his game IQ to get buckets. He can extend the floor because he can shoot from multiple areas on the court.  He is also capable of posting up players with ease.  I’d like to see him demand the ball more however, Anderson is fundamentally sound, look for more schools to jump on him.