Skip to content
HomeBAH BasketballGame of the Week: Seffner Christian vs Tampa Prep
The 3A District 7 match up featured Seffner Christian vs. Tampa Prep at Seffner Christian Academy on December 8, 2015. Top area players included, G Tyson Ward and F Derek Webster.
Tampa Prep in previous years has dominated their district and has been the measuring stick to other teams.  Yesterdays matchup was different; season ending injuries to top area UCONN committ 2016 F Juwan Durham and short term injuries to F Trey Sibert left theTerrapins shorthanded.  However, Coach Joe Fenlon and the Terrapins have adjusted and came into this meeting overall 4-0 and 1-0 in the district.  This game was a test for both teams.
In last night’s game, Seffner Christian’s Derek Webster finished with 20 pts and Reid Walker with 18 pts to lead them a 69-63 victory over Tampa Prep. The Terrapins top recruit G Tyson Ward led all scoring with a game-high 20 points. 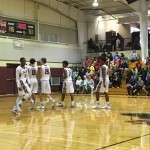 Tampa Prep’s Jake Schaffer added13 pts and Jaren Phillips with 15 pts.  This was a  physical game whose atmosphere was similiar to that of a district championship game.
After the game, Coach Sam Moorer stated “First game back from a 15 day layoff, I was very pleased. We got a lot of rust off early, and made some clutch plays when we needed them. Big time play from Reid Walker and Derek Webster. Having never beaten Tampa Prep before, this was a massive monkey off of our back. Now we are moving past that mental block, and will continue to stay hungry. We have nothing but respect for Coach Fenlon and his team, and look forward to battling it out with them in January. I couldn’t be happier with the way my boys played tonight. Great atmosphere and environment!”
Seffner Christian players F Christian Noskey, F Reid Walker and PG Darius Lue are becoming household names in the county.  Noskey had foul trouble for a good stretch of the game but is a definite factor in the strength of this team.  Lue has stepped up to become a leader for the Crusaders and Walker is playing at both ends of the court. Tampa Preps G Tyson Ward scored from multiple locations on the floor and dazzled the crowd with an amazing dunk in the 4th quarter.  However, there are some things the Crusaders will have to address while preparing for the Terrapins in their next match up; hopefully Prep will be at full strength.  Lets see how it will play out on 1/19 @ Tampa Prep, 7:30pm.