Day two of the Best of the Best Elite Showcase was stellar!  The State of Florida is in good hands when it comes to talent in the class of 2018-2019.  Here’s what we saw.

2018 6’6″ F Nassir Little of Oakleaf was far from quite!  He and Darius Days, were the most outspoken and dominant players of the day.  That match up allowed us to what Nassir was really made off.   Little shows a distinct attitude when he’s ready to drive to the rim.  He played well above the basket and has skills to create his own shot off the dribble.  Although he did not finished some shots at the rim, he didn’t have any issues getting there.  His high energy, he pushes him and makes it easier for Little to be a terror on the floor.  Whether its helping on a defensive rotation or straight man, this guy gets it done!

2018 6’4″ PG Elijah Weaver of Oldsmar Christian he played both days of the event and he showed why he is a special athlete.  He competed harder against top classes the day before, he showed skill as a PG that’s sometime forgotten.  His vision mixed with athleticism is of the charts.  We witnessed him for the first time at the Breakdown Showcase in Tampa and he gets better ever time we see him.   He shows consistent qualities even when he’s having a quiet day.  He lets defenders ride his hip while in a up right position were he is able to change direction at a faster pace.  This helps him see over defenders and keeps him ready drive pass defenders when ready.  The speed of the game doesn’t effect him like most plus “He’s a lefty”.  He still can work on smoothing some technical parts in his shooting form and use more of the pick and roll.  Weaver is definitely a player!

This is my 3rd time watching 2018 6’3″ SG Jeremiah Saunders of Sagemont and he is getting more confident and complete.  Saunders has developed a scorers mentality and he showed some athletic ability as we witnessed him dunk on a player in open court.   His growth at his position will be measured by size and the various ways he can score. He will need to use his jump shot to draw defenders out to open other scoring options.  He occasionally uses his pull up jumper and he’s capable of getting past players of any size.  Saunders was impressive and will be a player to set your sights on.

2018 6’8″ PF Darius Days of The Rock was the whole day.  He was the measuring stick for all players that day and was my best player at the event.  What makes Days special is his clear abilities to play both ends, be comfortable in pick and roll situations and do the dirty work.  Days can score off the dribble from about 10-15 ft out or put his back to the basket and power his way to score. Days foot work is exceptional and his motor is his strength. He just needs to work on the technical parts as a PF or work more on his shooting to be a stretch 4.  We definitely see a player with HM qualities who likes the completion.

2018 PG Damon Harge Jr. of Orlando Christian Prep came in and looked totally different.  He looks physically stronger.  He came in focused and serious, he wasn’t playing with defenders; this time he destroyed opponents as needed. He also took on challenges on the defensive end by getting in opponents personal space and creating turnovers.  This new Harge is spectacular.  Harge is a top notch ball handler, passes on a dime and uses change of direction well.  He is still working on controlling the offense to get the most out of his post players.  He doesn’t shoot the shot that often but does everything needed to make players look good.  He a drive and dish PG with good vision.  As he continues to grow and work on things, Harge will always be a player of interest.

2018 6’8” SF Duncan DeMuth of Seminole has stamped his name on the radar this year.  DeMuth can score in many ways, from long range, pull ups or off the dribble.  He is much more advanced then others at his age.  He has a soft touch and he’s not afraid to mix it up.  Duncan finished in the lane with some dunks and can use the contact to get and one’s or to get to the free throw line.  I worry about his defense against players of the similar size and talents but this fella is still growing and developing his skill work, so keep an eye on him.

2019 6’7” SF Marcus Goolsby Dunnellon HS was the new guy on the scene.  He’s still playing on talent however, he has the quality to be very good.  A raw talent, good size, runs in transition and finishes at the rim. Goolsby is a worker so lets see how he grows and how his game develops.  He’s a player of interest for sure.

Jewel of the day:

2018 6’3” SG Kevin Simon of Oakridge was instant offense!  He came a bit late to the event but had not problems getting into action.  Simon stayed in transition with and without the ball. He has a knack to score.  Size will be an issue however; heart will not.  His ball handling was productivity and his energy on defense was a quality that caught my eye.  He has the attitude and demeanor to be a player of interest. 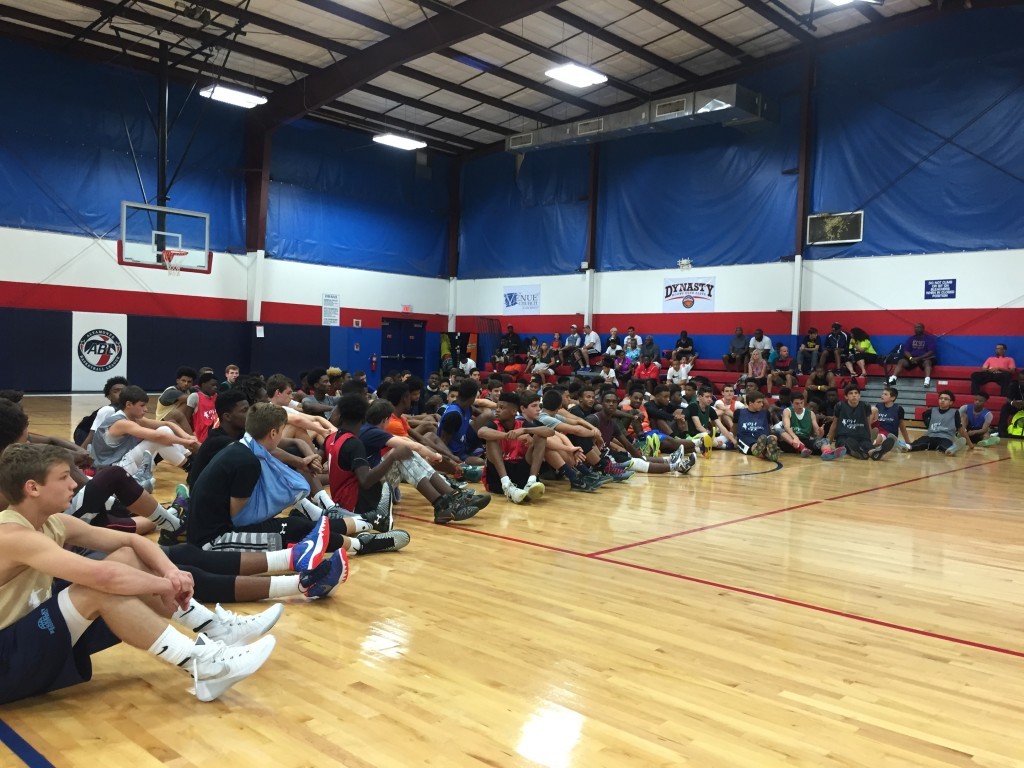