The Best of the Best Elite Florida Showcase took place this weekend at the Lake Brantley Field House in Altamonte Springs, FL.  Saturday’s 2016-2017 session will be part 1 of our report.  Here they are:

2017 6’6” F Ibrahim Doumbia of Miami Country Day may have been the most dominant player in the gym. Doumbia has a very high energy output, exciting with a touch of madness. His rebounding starts offense, he blocks shots and has a presence on help side defense tha’ll alter shots.  Doumbia is athletic and he’s a beline  runner.  His ball handling was average and can use some work however it is effective when he used less dribbles into the paint.  He has a long appearance, which gave him a edge in the rebounding category.

2018 6’4” PG Elijah Weaver of Oldsmar Christian is off the charts as a HM prospect.  Weaver is controlled and patient.  Weaver played both days this weekend at a high level.  His humble personality matches his poised game on the floor.  He started off slow but once the ball was consistently in his hands he started to facilitate.  Either it was setting defenders up to take off the dribble with his quick first step or just drawing extra defenders to create for others.  He’s a good sized PG, shaped well physically and has good wind to sustain long periods of time on the floor.   I’d like to see him work on his mid range shots and pull-ups. Weaver will use his frame as a barrier to ward off defenders and use their aggressive actions against them to roll off or change directions to get past them.  Weaver is a very skilled player and will only get better as he polishes up more.

2017 6’7″ SF David Nickleberry of Windermere is definitely a play-maker.  A point-forward with vision in and out of traffic.  Deceptively a good ball handler to be 6’7”. He’s able to shoot over smaller defenders and occasionally drive to either side for pull up jump shots.   Nickleberry’s vision was the drawing part for me, he was comfortable directing players and noticing opposing defense. He has a high PG IQ.  He will stay in front of most PG’s at the next level; however he will need to continue to work on his defense in order to defend effectively quick & smaller guards.

2016 6’5” G Tyson Ward of Tampa Prep is capable of being efficient at the 1 or 2 positions.  He made plays, ran the floor to finish with either hand, made great decisions in the open floor and looked to make the extra pass.  Ward was vocal and pushed himself to compete.  With his long appearance he was not a bad on ball defender.  He could work on creating more separation or space from his triple threat position. Ward will be a superb asset to college program based on our assessment.

2017 6’4” PG Marcus Cohen of Sickles HS came to play this weekend.  He stepped up tremendously in the second game of the day and didn’t stop.  At 6’4”, he’s a good sized PG with a knack to run offenses.  He uses his speed control very well, looks to pas up court, doesn’t over dribble nor take many bad shots.  Cohen is a simple and effective PG.  I would like to see him a bit more vocal and more demanding of his teammates. He can get to the lane, he doesn’t have explosive power  but he uses his long length to finish. Cohen will be a steal for a college program.

2017 6’0″ PG K.J. Fitzgerald of Cardinal Newman  was a standout as usual. Fitzgerald processes pinpoint vision when navigating through traffic. When Fitzgerald is over played by defenders, he uses his quick lateral movements to pass and distribute to others.  He sometimes gets a bit flashy when he’s comfortable however, this kid is action-packed. Can’t wait to see him this year at Cardinal Newman.

Diamond in the Rough:

2016 6’10” F/C James Love of American Heritage was big around the basket.  His a thin forward but the length works in his favor when needed.  From his blocking and the altering shots he made a difference.  His raw and unpolished talents could use a touch more work in the post area and pick and roll situations.  Love demonstrates good hand and eye coordination and meets the ball at its highest point.   He was explosive in the open court on uncontested dunks but missed a few short range layups when contested.  He is definitely a interesting player and with the work he can be developed. 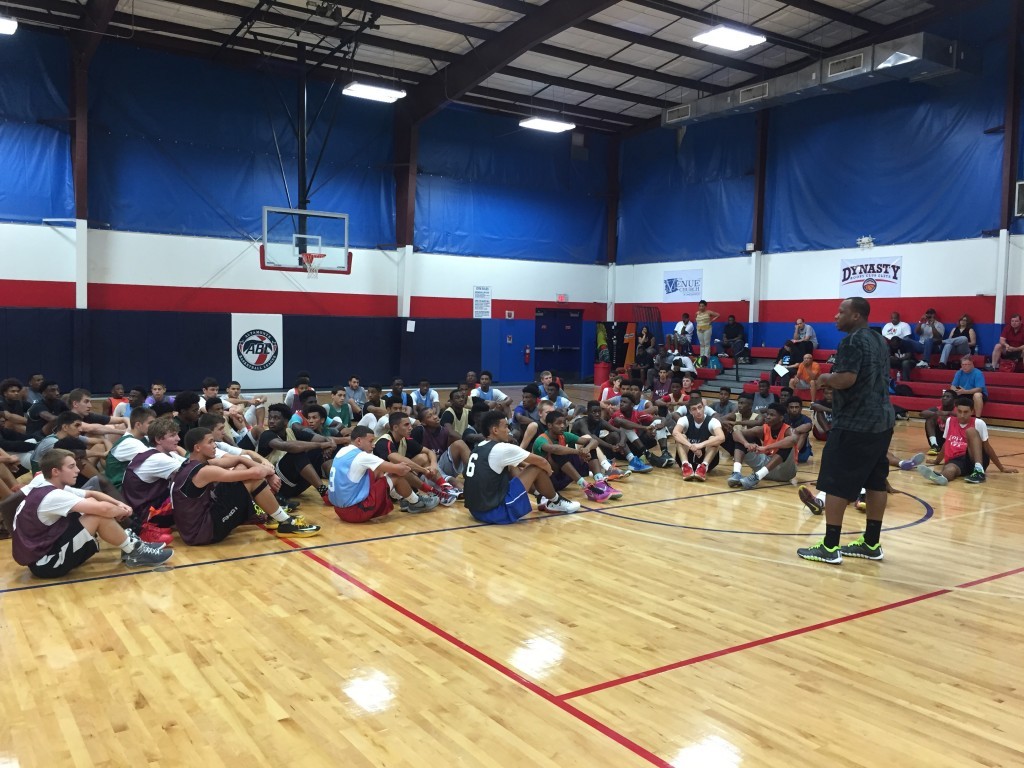