The USSSA Adidas Team Moam Kickoff Showdown this past weekend put some of the best 8th, 7th and 6th grade teams on showcase. The event was held at IMG Academy in Bradenton, FL and it brought teams out to go head to head with bragging rights at stake. Once the ball was tipped for play these teams came to play.  The Florida Vipers and Team M.o.a.M controlled the 8th grade bracket.  The 7th grade Weston Wolfpack and E1T1 were dominant as well this weekend. 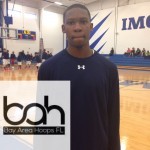 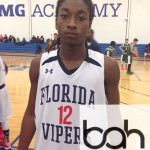 Khris Bogle, 6’4” 2019 SG of the Florida Vipers was very effective in the games we saw of him.  Attacks the basket, plays really hard and stays in front of the rim.  Showed athleticism and good hands.  Didn’t see him take many jump shots however, he got out in transition to finish. He was one of the better long term D1 prospects in the gym.

Maxime Demeus of the Florida Vipers is a 6’0 2019 PG with a no nonsense attitude.  The lefty as a patient but aggressive demeanor.  Also is a very deadly PG that can penetrate and create.  He can turn defense to offense quickly.  Definitely one of the top PG’s for the Class of 2019 in Florida.

6’3” SG Jaren Johnson of Team M.o.a.M was active on Day 1 of the event and showed his ability to create.  A promising athlete with tools to be special.  Johnson was sidelined for the semi and final games due to an ankle injury.

6’6” SF Adrian Valazquez plays with energy and plays both ends of the floor.  Needs to work on his

6’2” SG  Zavian Smith was competitive and put pressure on defenders.  Needs to be more patient.

6’0” SG Jordan Clark was athletic and made plays defensively.  Should work on his outside shot.

6’1” PG/SG Norris Taylor can shoot the long ball, make plays on defense and create off the dribble.

5’9” PG/SG Romaire Burke has a strong pull up jumper and a good skill set. Needs to get stronger.

5’5”PG DJ Gooden keeps the dribble low, doesn’t back down and played the PG spot well.

6’4” F Roshawn Mulgrave was active and played hard the whole weekend.  Stayed around the basket.

5’10” PG Grant Cohen displayed was not shy shooting the ball.  Ball handling was good and a good competitor.

5’10” Zach Mendiola was active and one of the key players to push the Stars to the DII championship game.

6’4′ Harlow Babbs rebounded well and had some crucial put backs in the semi finals against Florida Select.

5’8” C. Delcom was quick off the dribble and picked up his game offensively in the semi finals to squeeze past Bay Area Hoops Elite to advance to the DII final game.

2020 6’3” SG Dudley Blackwell is a definite player watch!  One of the major reason for the Weston Wolfpack winning the 7th grade D1 division championship.  Watched him play in the semi final against a tough Tampa Venom team and he stepped up.  He has all the tools you want in a SG and his play is dictated by the pace of the game.  Blackwell has good vision and range on his jump shot.  Cant wait to see him in a couple of years. 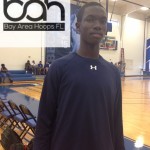 6’8” 2020 C Ebenezer Dowuona of the Florida Vipers is long, rebounds well and blocks shots.  Dowuona knows how to keep the ball high and run to the painted area under the rim in transition.  Could use some work on his jump shot and with time footwork should come as well. 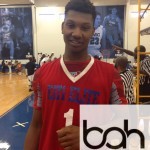 E1T1 2020 PF Gevon Dexter at 6’5” Gets the job done!  He plays extremely hard, a high motor and runs the floor.  This is my second viewing of him and he looking more comfortable being a around the rim.  Dexter’s shot will need to improve as he gets older plus is his ball handling is limited. When playing the South Florida Wolverines in the semi finals he was unstoppable.  There was little that any team matching up against him could do once he touched the ball near the rim.  Dexter is the anchor for the 7th grade E1T1 team and was the most dominant player at the event.

6’4” Leanord Manuel of the E1T1, a 2020 SG is a going to be an impact player.  With a combination of athleticism and size it was hard for teams to keep him grounded. Mano showed good lateral quickness and ability too make second jumps to the rim look easy.  Once his patience on offense starts to show along with a developed pull up jumper, it will be hard to check this young man.

The Wolverines along with Florida Vipers and E1T1 Team Stat were placed in a bracket that was considered the toughest of the event.  SFW just missed D1 bracket play by losing in a close game against E1T1 66-57.  They got down early in the contest but showed determination behind the play of Andre Volmar and Jermaine Dyges.  They attacked the interior of E1T1 and made a close game in the 4th quarter.  They were the most competitive team in the 7th grade division.

PG Jeremiah Wicks is a hard worker!  Creates off the dribble to get to the basket,  Good size and someone to watch for.

SG Doug Deveaux competed and challenged the best 7th grades there.  Can really get out in transition.

PG Jermaine Dyges was phenomenal running his team all the way to winning the DII championship.  Good feel for the game.

SG Andre Volmar was unconscious when it came to shooting the three ball.  Looks to compete with the best!

PG Keon Smith and PG Kobe Bennett worked great together.  They pushed the tempo and used the skilled ball handling to pressure other PG’s on defense.

G Jacorey Brooks was very productive and made plays when needed.

Quun Vickers and Isaiah Quinteros key factors and they both impacted games in the semis and the finals to defeat E1T1.