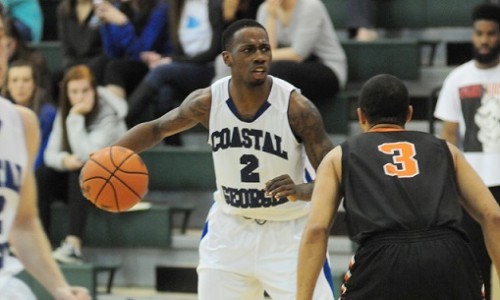 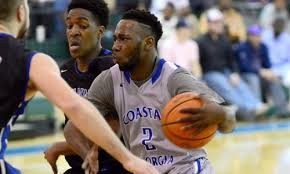 High Defensive IQ with excellent court vision.  Recovers well off defensive collapse.  The reliable lefty PG is an elite scorer who shoots the ball well from beyond the arc.  He is a strong and steady ball-handler who does a great job of surveying the defense, evaluating his options and reacting to what’s happening on the floor. This allows Burke to give a big a chance to get into position, and run in transition to score.  Off the dribble, his changes of speed are tremendously hard to guard when he looks to set up shooters.   He uses both hands well; but will use his right hand more often than his primary left hand.  Once Burke penetrates the paint area, he likes to use drop offs and an occasional floater.  Burke has many scoring abilities; off the catch and shoot, step backs or pull-ups.  He has extended range on his high arching shot.  At times in pick and roll situations will not square up the player after he gets through.  He can drive and dish, find open shooters on the weak side, make post-entry feeds and can also dish the ball over the top of the defense with flashy lobs. He has excellent timing on his passes, and outstanding court vision.  There is a case to be made for Burke as a very under the radar point guard waiting to explore his game professionally.  In college basketball, he posted some of the best stats in his conference as well as school history in previous seasons. Burke’s ranking in the top in NAIA D1  really confirms that he has capabilities to perform at a high level.  Perhaps the most impressive aspect of Burkes’ playmaking is how he has become a closer or a big shot maker.

At 6-3, Burke has good size for the point guard position, speed is average and explosiveness at the rim acceptable for his position.  He does do a good job of playing at different speeds, showing the ability to change pace and use his frame to keep defenders off balance. He is extremely exceptional in isolation situations, which is an area Pro teams will want to see him do, which will help him as a pro point guard because the need to have abilities to improvise on the fly in late-clock situations is a must.   Burke ability to play high minutes is a plus but I do worry about fatigue being an issue as it results in more long range shots.

Overall, I do project him to be an efficient point guard at the Pro level, teams will want to see him develop into a plus defender because his knack to compete and score is relevant already.