Bay Area Hoops have been watching 6’8” 2017 SF Kevin Knox in his early stages of his basketball career at Mullrennen middle school. We notice his capabilities to handle the ball, his slender frame and square shoulders and length. We became very intrigue to see his progress in development in the future. 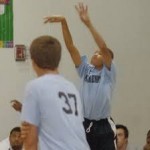 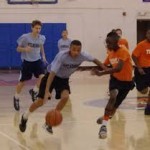 His growth took off in the 2014-2015 season, as he averaged 24.4ppg and 10 rpg with Tampa Catholic (Tampa,FL.) under Coach Don Dziagwa. Knox become a force at his position.  Athletically Knox is phenomenal, he can defend different positions well for his size, moves well in transition with or without the ball, rebounds well, blocks shots and can score in multiple fashions.  As a rising Junior, we expect even more from this young man.

He has been polishing his game over the years and has becoming a dominant player in the state of Florida.  Once Knox got on the scene the summer before his sophmore year, he has not looked back.  ESPN ranks him 45th in the nation of class 2017 and 2nd in the State of Florida.

We watched him his freshman year at a Hoop Exchange showcase in Orlando, Fl and he gave Scouts and Coaches a good showing.  Coming out of Tampa,FL, Knox shined more light on an area re-eventing its basketball nature.

Knox played well in the Nike EYBL with E1T1 this past spring. Knox recently contributed to the USA 16U team winning gold at the FIBA Americas Championship in Argentina.  When asked about his summer recruiting process he stated

Kevin Knox Sr. who played football for FSU knows the ups and downs of a recruitment process and has been giving young Knox the tips needed to succeed. These tools has been visible in his improvements and growth each year.

He has offers from Maryland, Georgia, Virginia Tech, LSU, Florida State, South Florida, Memphis, Xavier, Texas Tech, Florida and Miami, plus interest from Kentucky, Arizona St., Kansas St. and Virginia.  For the 2017 class in his area, you’ll find Knox within the top of that list.  However, Can he be the top talent coming out of the Tampa area?  His name rings bells amongst big names such as Juwan Durham, Eric Hester, LJ Figueroa and Tony Bradley to name a few.

But Knox is not looking at it that way, but remains humble and focus on bigger goals.  Knox is no stranger to the grid iron neither.  He is a dual threat at the QB position at Tampa Catholic.  So these next 2 yrs will be interesting

Check out some highlights: